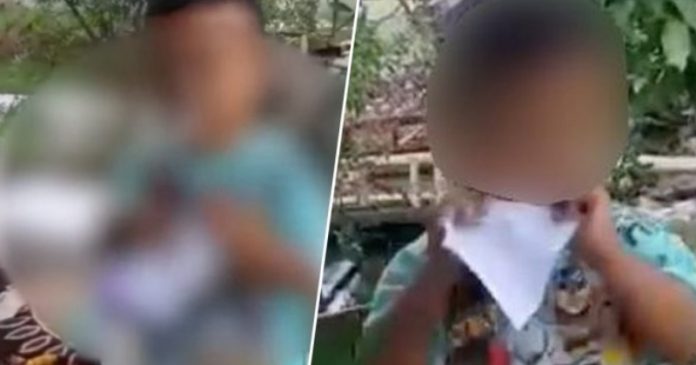 Note: Photos of Pipit have been pixelated to protect his identity.

Children like to eat candy or chocolates more than adults do. Sometimes while they are growing up, they like to experiment with eating unusual things that are non-toxic like glue or chalk. Have you encountered children who have the habit of eating non-edible things?

The footage went viral recently of a 3-year-old boy in Indonesia who habitually ate rubber slippers and pieces of paper like they were candy. The little boy, Pipit, had the habit of eating these non-edible things thing he was a year old, according to his mother.

The video was captured in a house in Jaya Sakti, Bekasi, West Java, Indonesia, and garnered multiple reactions from social media users. It also has caught the attention of local media, CNN Indonesia, and they visited the child’s home to hear their story.

“It’s true that my son likes to eat slippers, he eats them like eating rice. In a month, Pipit can eat five pairs of slippers, and we will even buy extra slippers for him,” explained his mother. “If we do not follow his request to eat slippers, Pipit will rage and cry.”

Pipit’s mother confirmed that he only eats unused and brand new slippers. They were all washed clean before he consumes them. In addition to slippers and pieces of paper, Pipit also eats cardboard.

Pipit’s mother revealed that he never complained of any stomach pains or digestive problems after swallowing the non-edible materials like slippers and styrofoam.

According to FamilyDoctor.org, Pica is a compulsive eating disorder in which people eat non-food items. Dirt, clay, and flaking paint are the most common items eaten. Less common items include glue, hair, cigarette ashes, and feces.

The disorder is more common in children, affecting 10% to 30% of young children ages 1 to 6.

• In most cases, pica occurs due to mineral deficiency or mental disability.
• Deficiency of minerals such as iron.
• Chemical imbalances in the brain or brain injury.
• Behavior that tries to attract attention.
• Obsessive-compulsive disorder.
• Poverty.
• Neglect from family.

• Don’t let the habit continue.
• Explain to the child what is safe and unsafe to eat.
• Talk to the child about food and non-food items.
• Tell your child the consequences of eating non-food items.
• Keep items that they can always get easily such as, chalk, powder, paper, and others.
• Make sure they eat a balanced and nutritious diet.

Parents whose children have the PICA disease or other bad eating habits should be aware of this and have the child be consulted by a specialist. Do not ignore the tiniest symptoms of PICA to avoid any harm.

Broccoli might be full of worms without you realizing! Use these...

Good for your skin, hair and health, these are 7 amazing...