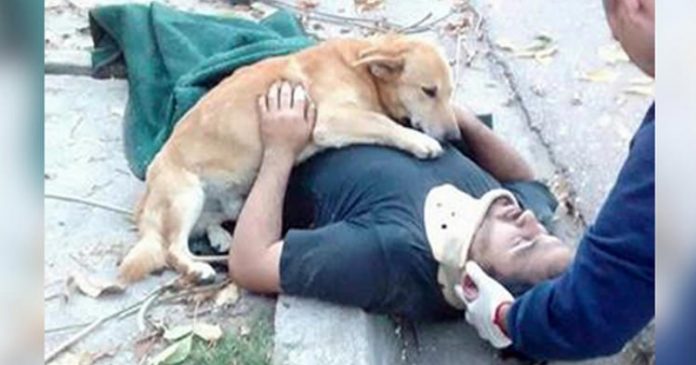 Dogs are very loyal, no wonder they have been called “Man’s Best Friend”. More often than not, when they go astray, they always find their way back home. A dog in Argentina has proven very loyal to its owner. Tony was devastated when his owner was injured and he thought he had lost him forever.

Recently, Jesus Hueche was pruning and trimming parts of a tree in his front yard when he suddenly slipped and fell about 6 feet to the ground and hit his head on the concrete sidewalk, knocking him unconscious. The situation did not go unnoticed by his family and neighbors nearby, and he was not alone in the ordeal.

His loyal furry friend, Tony, came to the rescue, hugged his fallen owner, and never left his side. He was still hugging his owner when the paramedics finally arrived.

When the paramedics attended to Jesus and put a neck brace on him, Tony never left his owner and was very worried. Eventually, Jesus came to and gave Tony reassuring pats to let his loyal friend know he was doing okay. Still, Tony did not move away.

When it was time to load Mr. Hueche into the ambulance, Tony wanted to come along. He persisted and tried to climb inside with him.

The loyal dog and his owner did not part for long. Jesus only suffered minor injuries and was released later that day, reuniting with his loyal and beloved dog.

The images of Tony’s rescue and loyalty were shared on social media, and they instantly went viral. Local radio station La Brujula 24 has interviewed Jesus Hueche and learned about the story of his faithful pup, whom he rescued as a stray.

“One day, we saw him on the street and adopted him, gave him love, food, and [he] is part of our family,” Hueche told the station. “For me, he’s like a son.”

Dogs can show their owners just how much they mean to them in the sweetest of ways. And for Tony, his dad clearly means the world.