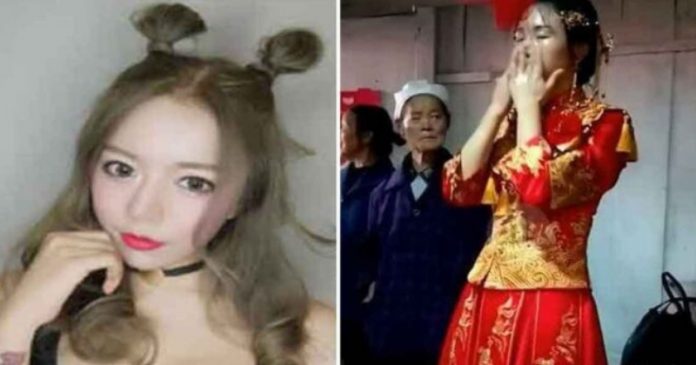 During these modern times, many women have resorted to all kinds of beauty products and cosmetic surgeries just to improve their looks. Some financially-abled women would even hire a professional make-up artist for an occasion. However, some women have no qualms about showing their natural looks compared to others who wear layers of make-up just to look beautiful.

Many women assume that it is a man’s dream to marry a beautiful woman, which is somehow true in some aspects. However, in some surveys, men prefer intelligent women with who they can have a decent conversation than those who are conscious of their physical looks.

Recently, a local in China revealed that there are marriage rules in some provinces, such as the bride must wash her face before she marries. She should not wear too much make-up. A bride should show her natural face to her groom before they marry. Not long ago, a similar incident occurred when a couple was about to be married.

The woman who was about to be married was requested to remove her excess make-up by washing her face before the wedding ceremony. The in-laws required her to show her natural face to her new husband, relatives, and friends.

On the contrary, marriage is one of the most important events in a woman’s life. Naturally, she will require a professional to do her make-up since she desires to look beautiful at this unforgettable event. Her wedding attire is usually elegant as well.

The bride-to-be was from another town. The couple met while they were working for a company in another city. One day, the groom introduced his soon-to-be bride to his mother. His parents approved of his bride. The relationship between the woman and her future mother-in-law was harmonious.

On the wedding day, the bride looked very beautiful wearing her elegant attire and her make-up was done beautifully. The mother-in-law disapproved of her make-up and could not believe that she was the same girl her son has introduced to her. According to local custom, the bride should remove some of her make-up and wash her face before getting married.

The photo above shows the bride washing her face and rubbing out the excess make-up while the mother-in-law beside her looks on. The elderly woman looked serious while the bride’s face looked displeased, though she followed the request. She did not understand the custom of removing her make-up at such a formal event.

Although her mother-in-law made a peculiar request, the obedient bride complied.

Netizens had mixed reactions when they realized that the custom was quite peculiar. The questions most of them wrote in the comments were: “Is this really a tradition? Or the future in-laws are just overreacting?”