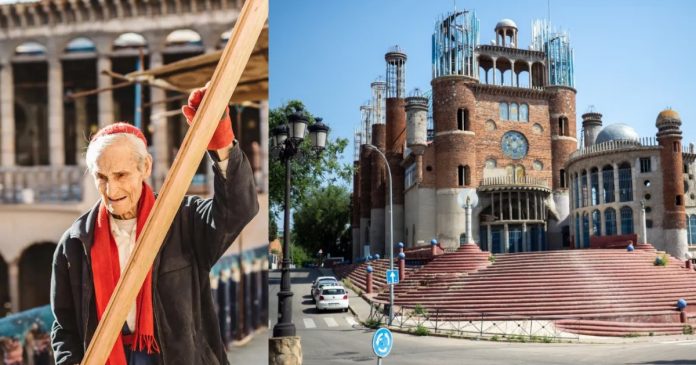 On the outskirts of Madrid, Spain, a former monk named Justo Gallego Martínez, built a cathedral on his own using scrap materials he could find and restored the broken bricks, stained glass, and concrete of the old church.

It is known to be the most bizarre church in the world. The huge 4,700 square meter area has a crypt, two cloisters, 12 towers, and 28 domes. Unlike other establishments that are professionally made, the cathedral’s foundation is done amateurishly, with no blueprints of the establishment, no building permits, and even the bricks used were from scrap materials.

This is the Catedral de Justo Gallego, an establishment unfortunately not recognized by the Catholic Church. A former monk from Spain, Justo Gallego Martinez, started building it 60 years ago.

Justo was born on September 20, 1925. He was raised in the small town of Mejorada del Campo in the Community of Madrid. His parents were farmers who worked in the fields all day. Growing up, his mother instilled strong Catholic faith in him, leading him into becoming a devout Catholic.

Justo was 11 years old and in school when his education was interrupted by the Spanish Civil War. He had first-hand witnessed communist forces shooting priests and ransacking churches in his hometown. Due to these events, Justo lost his respect for the town’s socialist administration.

After a few years, Justo became a novice in a Trappist monastery. In 1961, when he was 36 years old, Justo contracted tuberculosis, and while recuperating, his health still deteriorated due to the Trappists’ strict abstinence way of life.

Justo made a vow that if he recovered from the illness that struck him down, he would build a church in honor of the Nuestra Señora del Pilar (Our Lady of the Pillar). When he recuperated, he fulfilled his promise and began to build on October 12 of the same year from a piece of land his parents bequeathed to him. It was the same day of the feast of Our Lady of the Pillar, to whom he had prayed and recovered.

The building did not have any architectural drawings, no blueprints, and formal plans. When the locals learned of Justo’s plans of building the cathedral from scraps, they called it “the cathedral from junk”. Initially, Justo just mapped out the designs from ideas he worked on while he was on site. During its evolvement over time, Justo found inspiring designs from St. Peter’s Basilica in Rome, Italy, the White House in the USA, and various castles and churches around Spain.

Most of the materials used to build the cathedral were mainly from scraps and recycled objects. These consisted of salvaged scrap materials and excess materials donated by construction companies and brick factories nearby. In fact, some parts of the building were made from old drums used for petrol. No crane had been used during construction.

Justo would start working from 6:00 AM until 5:00 PM daily, except every Sunday. A parish priest named Eusebio Sanchez Domingues said, “Justo is a devout man who attended Mass every Sunday.”

For 60 years, Justo mainly worked on his lonesome. Occasionally, he would be assisted by a local named Ángel López Sánchez and six of his nephews, who mainly helped place the framework on the dome, and by some volunteers from the local town. Although now and then, he would consult an expert at his own expense. “He’s a marvelous person. He loves to talk to people, to explain everything. A wonderful person who loves Christ.” said 52-year-old Ángel López Sánchez, who spent 24 years of his life alongside Justo, who helped him learn the construction techniques without any architectural knowledge.

Ángel has confirmed that Coca-Cola Bottlers have supported and funded some of the construction work, and in return, a huge photo of Justo made from bottle caps has been displayed in their office. Due to its long history with the construction of the cathedral, the company’s sports drink, Aquarius, released an advertisement in 2005. The TV commercial, which is a minute and 36 seconds long, showed Justo while constructing the cathedral, attracting visitors to the site as he continues working. The advertisement gave him Spain-wide recognition, making the locals aware of the one-man constructed cathedral.

Justo lived with his sister near the construction site. During the entire duration of the construction, Justo financed his work by selling some of the farmland he inherited, although he did not refuse donations given by locals and some visitors.

Unfortunately, the building did not have any construction permits and formal planning permissions from the authorities of the local town. Some citizens are not impressed by Justo’s work. Andrés Cánovas, an architect at the Madrid School of Architecture, made a comment in 2013 about the building to the online news outlet Madrilánea. The remark may have been the reason for the Church and the town council on their hesitation to pledge their support to Justo’s building. “Any architect who signs off on this building would be crazy to do so,” Cánovas said. “I would never take my children to spend an afternoon there; it violates all safety regulations.”

“It is incredible that they built a cathedral of this scale without blueprints nor an overall design, and that this was done by a single individual,” a construction manager, Jesús Jiménez, said in an article in El Mundo.

On November 28, 2021, Justo Gallego Martínez died at the age of 96. His final wish was to be buried in the crypt located on the premises. Although the local council has permitted to preserve the cathedral, they were still hesitant to give in to his request since the establishment did not meet Spain’s sanitation rules. Instead, Justo was buried in Mejorada del Campo’s cemetery.

According to local media, while on his death bed, Justo has bequeathed his cathedral to the NGO, Mensajeros de la Paz (Messengers of Peace). They committed to finishing his life’s work. Ángel López Sánchez worked alongside the members of the NGO. “At the moment, we are at a standstill. Let’s see if we get the permits,” said López. “They pretty much ignore us. Well, now I have Mensajeros de la Paz.”

Father Ángel García Rodríguez, founder and president of the Mensajeros de la Paz, says, “It depends on getting the permissions and on the authorities. However, there is his spirit. When we dies, the only thing that remains is the spirit. His spirit will continue to reside there. It won’t be buried. It will be floating around the cathedral.”