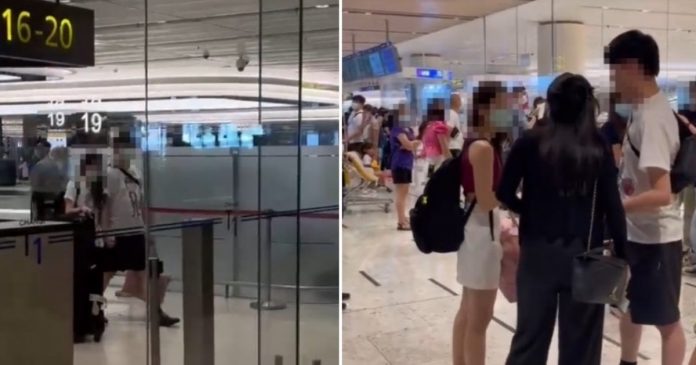 A woman posted on her Facebook that she and her son saw a video of her husband walking out of the Singapore Airport and holding hands with a woman they do not recognize. The post about the video caused heated discussions among netizens and people who knew the husband and the mysterious woman. The wife also mentioned that she and her husband had an agreement that they would meet in their home in Johor Bahru, Malaysia, but he did not arrive, disappointing his son.

On the 18th of December, 2021, the wife posted a video on various social media platforms and Facebook accounts across Singapore and Malaysia. The video shows her husband making his exit from the airport and walking hand in hand with a woman she didn’t know. The two had a conversation at the arrival pick-up area. The video raised heated discussions among netizens.

The wife complained that her husband made no video calls to her for the past 6 months. Not even a single phone call, and did not come home.

She also said that together, they worked hard to earn money, so her husband may continue studying at the university to get a master’s degree for a better future. The couple also bought a house and a car after he graduated.

When the wife finally became pregnant, they decided to register for marriage. She said everything went well even though there was no wedding ceremony, no photos, and no dowry. Upon giving birth to a 3.5 kg. boy, she devoted herself to being a stay-at-home mother for 5 years and raised their son well.

On December 3, 2021, her husband said that he was going to apply for a job in Singapore. There, he would be living in a house of a female student who plays the violin. “I really thank this female student for taking him in, and I even sent a private message on Facebook to say ‘thank you.’”

In mid-December, she tried to contact her husband again to inform him that she was taking their son to a school in Kuching. Also, she will be having a medical check-up since she was having health issues. The wife claims that she could not reach her husband at the time.

“During those six months he didn’t contact me, my child kept asking: ‘Where is Dad? Why didn’t Dad call me?’” The wife said in her post on Facebook. The child revealed to his mom that he envies other students in the school who are being accompanied by their own fathers. Avoiding her son to be disappointed, she only kept telling him that his Dad was working hard in Singapore.

During the school holiday in June and her husband’s birthday at the same time, the woman took her son back to their home in Johor Bahru. However, when they arrived at the house, she found that the door lock had been changed.

Finally, she decided to go to Singapore with her son to find her husband. She went to the Singapore Police Station to inquire, but the police could not contact her husband’s mobile phone. The wife informed them that the woman and her husband have been seen going to and from their house to Singapore airport a few days ago, waiting for a plane coming from Thailand. She learned from friends that her husband might be going to Thailand with the mystery woman.

Finally, the day came when she saw him. When they were at the arrival area, the wife exclaimed to her husband: “You did not wait for me! You did not even look at me! I stood here at the gate with your child and saw you holding this woman’s hand, wearing couple’s clothes, and waiting for your luggage. You keep breaking my heart! I just wiped my tears and waited for you at this gate. That girl! That student is carrying the backpacks I use!”

According to another video that went viral, she also scolded her husband for “not being a responsible father and a good husband”. They are still legally married, though. In her posts on Facebook, she was reaching out to her husband and asked why he did not have a job for over 6 months. His family was living in Kuching. Why did he not decide to come home?

After the airport ‘incident’, the wife claimed that she agreed with her husband to meet her back home in Johor Bahru, Malaysia. Her husband had a Singapore-registered vehicle, so he could take his son back home with him rather than stop over at the checkpoints, which she will be passing through going back and it takes so much time. However, her husband lost contact with his son in the end.

Finally getting ‘fed up’ with her cheating husband and his empty promises, the wife urges him not to disappear or hide even from Facebook. “Let’s discuss our divorce face-to-face! You are hurting your son! Don’t go missing! Don’t hide anymore! If you want to let me go, then let me go!”

Her most recent posts on Facebook have been tagged by the Immigration and Checkpoints Authority of Singapore, among others.

Homeless man got a job and a flat after returning wallet...

Man on wheelchair proves that disability is only in the mind—his...