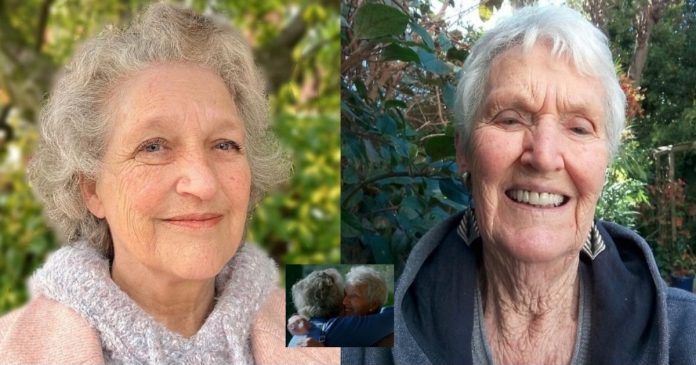 It was a miraculous event for both mother and daughter when a 65-year-old woman found her biological mother, an 84-year-old woman in Cannes, South of France, after searching for her for over 2 decades. Years of unfortunate searching led her to assume her mother has passed. An episode of ITV’s Long Lost Family helped the woman find her mother, which led to an emotional reunion.

65-year-old retired teacher and a mother of 4, Judy Kenyon, from Dudley, West Midlands, relentlessly searched for her biological mother for over 2 decades, but to no avail, and feared that she may have passed away.

“Time is running out,” Judy said on the ITV show. “Or it may have already run out. I don’t know whether my mother will still be alive. There’s that little hole in your heart that just can’t be filled by anything else. I need to find her.”

Judy was born in 1957 and was adopted after a few weeks along with a boy named David. They were raised by their adoptive parents in Dudley, West Midlands, but their parents divorced when they were young. The mother married an aristocrat, and they lived in a grand manor house, but Judy and David never felt welcome.

“On the outside, what people could see was this wonderful facade of a fabulous home and prosperity, whereas, behind closed doors, things can be very, very different,” Judy said. “My step-father ruled the house like you would rule the army. It was quite a cold house. There wasn’t much affection. I didn’t feel that I belonged.”

As years passed, David successfully traced his birth parents and was fully supportive of Judy’s plans to find hers. He promised to support her in her searches, no matter how difficult it would take.

Judy resorted to various genealogy sites and adoption registries to find information about her biological mother. She discovered that her birth name is Jane Masse, and her mother’s name was Gina Masse. Judy found multiple records of people named Gina Masse with multiple possible addresses. She wrote to all of them, but to no success.

“Each time I wrote, I wondered if my mother would open the letter,” Judy said.

While searching, Judy’s hopes have risen when she found a birth record of a potential half-sister born in 1962 to a certain Gina Masse. Surprisingly, the baby’s name was also Jane. After 2 decades of unsuccessful search, Judy assumed that her birth mother may have passed away. Though she still hopes to find her probable namesake sister, Jane.

Fortunately, Judy discovered that both Gina Masse and her daughter Jane are alive and well. Thanks to the ITV show Long Lost Family. She learned that both were living in Cannes in the South of France.

Gina Masse told Long Lost Family host Nicky Campbell that she kept 2 of her newborn baby’s photos all these years. At the time, she had to give up her baby for adoption since she was still an unwed mother at the age of 19 in the 50s.

“Because otherwise, I had nothing left of her. That’s all I had,” admitted Gina, a mother-of-four. On her end, Gina had lost hope that Judy would want to search for her. “I thought that if she tried to find me, she would have found me because my parents lived at the same address forever.”

Incidentally, Judy had written to this address, but Gina’s parents had moved a year before the letter arrived. Judy was devastated to find out that she was very close to finding her mother and how her mother gave up hope in assuming her daughter would search for her. In the end, both mother and daughter are overjoyed that they have found each other and would be reunited at last.

Thanks to the TV show Long Lost Family, Judy and Gina reunited in Cannes and met her namesake Jane and 2 other siblings she discovered existed.

“It just shows you miracles still happen in this day and age.” Gina happily said.

Hilarious moment baby boy looks so confused when he meets his...