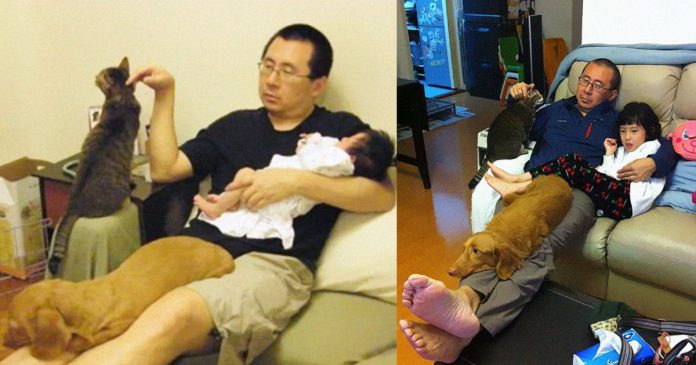 Even their pets joined in the challenge. Each year for 10 years, a father and his daughter recreate their original position while watching a video together with their dog and cat. This is one of the best memories a family can have… a 10-year challenge.

The ‘photo recreation’ or ‘photo comparison’ challenge has been trending online, and you would be surprised at how people recreate their baby photos 10 or 20 years later. Hilarious photos have emerged on social media sites and some people even invite their friends to the challenge. They tag their post with #ChallengeAccepted when acknowledged.

A few days ago, pictures of a father and his daughter recreating the same scene for 10 years emerged on social media, touching every netizen’s heart. Mr. Huang’s daughter, Tiffany, was born in 2008. The same year, her mother accidentally took a candid photo of Mr. Huang and their newborn daughter while he was watching television and tending to her. Even their pets joined in the photo. This gave an idea to Mrs. Huang that started the annual challenge.

Mr. Huang claims that he just finished changing the baby’s diaper and wanted to relax for a while on the sofa. He did not expect that the dog would join in and sit on his lap, and the cat emerged from the room to ask for some head-scratching. “My wife took out the camera and took this heartwarming picture!” Mr. Huang said, smiling. “She took a photo every year of us doing the same position ever since.”

Every year since, Mrs. Huang would take a photo of her husband with their daughter and the pets at the same location, doing the same position. Their daughter Tiffany was growing up gracefully and was obedient to do the challenge. As time passed, she began to take interest in the challenge and took the initiative to remind her parents of the ‘photo session’ yearly when the day arrived.

Tiffany was growing taller by the year and soon began to wear glasses. She still did not hesitate to snuggle up to her father for the photo, despite her growing height.

Mr. Huang said that this series of photos is not only his way of accepting a challenge but also subtly showing netizens the awareness of keeping your pets as a part of your family. He reveals that some people abandon their pets once a woman is pregnant at home. Some people believe that pets are a hindrance to babies when they are born. Mr. Huang ignored the warnings of his parents and insisted on keeping the pets at home.

“I still had furbabies at home while my daughter was growing up. She has been raised well all these years. She is healthy, and has become a gentle and caring person to animals and everyone else.”

Finally, Mr. Huang happily said: “Come to think of it, there is nothing really special about this series of photos, but when we look back at the photos after ten or twenty years, they are indeed irreplaceable precious memories!”

The ‘ten-year challenge’ or ‘recreating photo challenge’ has been trending online and is very hilarious when you view the entries. Go ahead, accept the challenge a friend invites you to do. You may be amazed at your results! #ChallengeAccepted

Juice company was shut down for dumping orange peels on lifeless...

Deported from Germany and settled down in the United States. This...