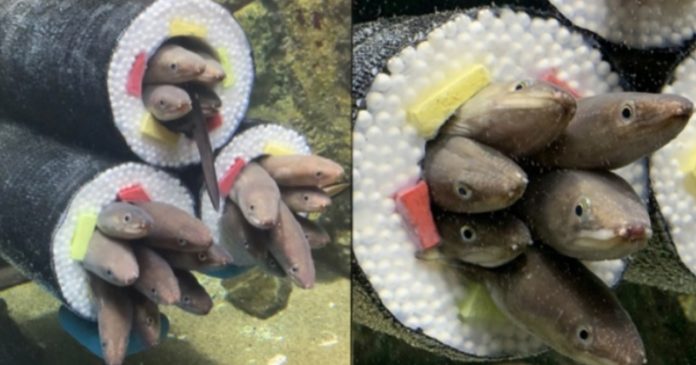 Whether in the open sea, or simply in an aquarium, they’re usually found hiding in caves or burrowing themselves in soft sediment or sand. According to Wikipedia, eels live both in salt water and fresh water and love staying in narrow spaces for safety. They consist of eight suborders, 19 families, 111 genera, and about 800 species.

Considering what the eels love to do, the Sendai Umino-Mori Aquarium in Japan came up with the idea of building comfortable ‘beds’ by installing ehomaki (sushi roll) cylinders for the eels to sleep in.

Look at their cute little heads poking out of the ehomaki beds.

Anago, also known as Conger Eels, lives in saltwater and can grow to about 40cm. to 90cm. and are commonly used in Japanese cuisine; foods such as unadon and unajū are popular but expensive. They are also used as an ingredient in ehomaki.

According to the website uminomori.jp, the eels can be visited at the aquarium between 16 January and 3 February.

The aquarium released “eels in ehomaki” plushies early this year due to the popularity of the attraction.

The plushie even allows you to remove the eel from the sushi roll to use as a bolster. So creative and cute! ❤️

Nurse from China gets creative with a handwritten note to inform...

Keith Duffy of Boyzone is Proud of his Daughter who was...