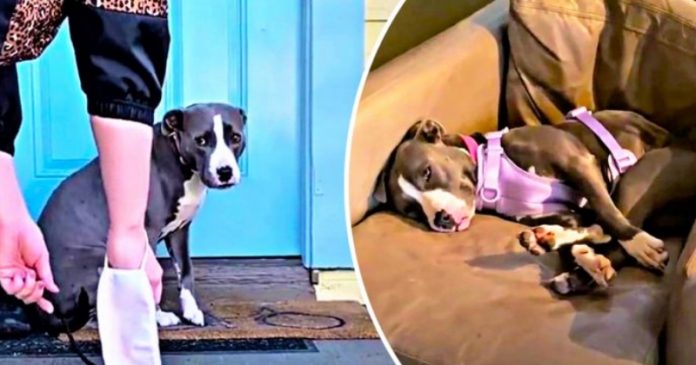 Not everybody gets to live a happy family life, especially if they are not complete. For some, they are separated from the family and chances are, they get to live alone. Sadly, there is no such thing as a truly “happy” family. This is the most traumatic experience for someone.

That is what a pitbull named Lillie experienced.

Lillie lived in an animal sanctuary before she was adopted by Karen Masser, a woman from California, USA.

When Lillie was finally adopted and brought to her new home, she showed no feeling of happiness or excitement. Unlike any other animals who love their new home, Lillie looked hesitant.

She always had a look of worry and did not want to get inside the house. Lillie just sits in the backyard and rarely moves from there, and sleeps alone outside.

Eventually, Karen was able to persuade Lillie to enter the house but she only stood next to Karen’s bed, alone. Lillie then laid her head down on a pillow and continued to observe her master as if being scared that Karen would leave her.

Karen later realized that Lillie was not familiar with a lot of things including how to use a water bowl. Also, Lillie did not know how to play with the toys.

She was also very scared of what was in her surroundings. Due to this, Karen slowly began teaching Lillie things she needed to learn.

Karen then gave Lillie a tour of the house so she would know every corner of her home. Soon, Lillie began to familiarize herself with the house and she especially loved the sofa where she usually sleeps. She is said to be sleeping more often since.

At some point, Karen thought that Lillie was getting bored at home, so she took her out for a walk but Lillie did not want to go out of the house. She seemed to fear that she may be brought back to the shelter. Though after three weeks of encouragement, Lillie finally allowed herself to go out for a walk with Karen.

After getting used to everyday routine, Karen discovered that Lillie was actually a good and gentle dog. Lillie also loved being close to her master and spending time with her, and loves being embraced.

After some time, Lillie got used to her new home and became cheerful and happy with her new family. She is no longer shy or skeptical of her surroundings.

Karen is very happy that Lillie has adapted to her home. She says she is very lucky to have Lillie, and Lillie in return has accepted that she is finally home.

Heartwarming moment lioness Sirga jumping onto her caretaker for a big...