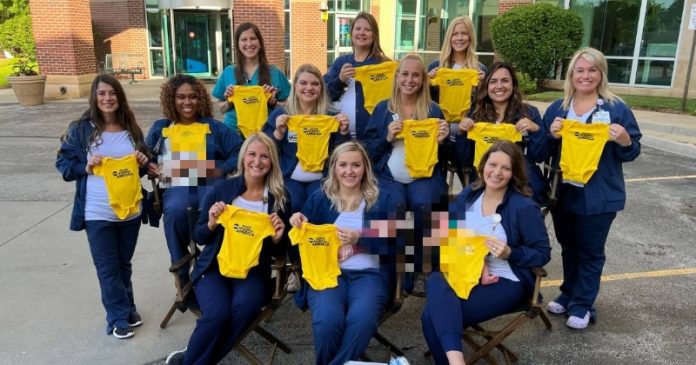 It may not have been the first incident of baby booms, though lately, the news of 14 nurses being pregnant at the same time in the same hospital department has instantly gone viral. The nurses at Saint Luke’s East Hospital in Kansas City, Missouri, can expect to have their babies born before December. Photos of the 14 expectant mothers were posted online, and netizens are amazed!

▼Caitlin Hall, the first nurse to be pregnant, initially chose to hide her pregnancy since this was her first baby. She was already in her 12th week of pregnancy when she finally chose to reveal the news to her colleagues. Unexpectedly, other nurses from the same department shared the same news.

“I thought I was the only one that was trying to get pregnant,” she told Fox News Digital. “It was my first pregnancy, so I was trying to keep quiet until about 12 weeks, but other people started announcing, so I told everyone as well.”

▼Caitlin was surprised that every other 2 weeks a colleague would announce her pregnancy until finally, 14 nurses from the same department were pregnant at the same time. The news delighted everyone at the hospital. Caitlin has successfully given birth to her first baby on June 3. She admits that she may be able to connect better with her patients now that she has experienced giving birth, which would be of great help when it comes to communication between doctors and patients.

“We have such a different perspective as OB nurses, so to be able to experience this all together has been such a relief but also really exciting to go through this season together,” registered NICU nurse Ellie Kongs said, who is expected to give birth late October.

▼Group photos of the pregnant nurses were taken at the hospital. One of the photos shows all of them lined up, and Caitlin, the first nurse to have given birth, was standing at the far left of the group. The hospital staff even prepared balloons for the gender reveal portion of the photo shoot, although some of them preferred to wait until they have given birth to know the baby’s gender.

“We can’t wait to spoil these moms and babies just like we do with every special delivery at Saint Luke’s.” one of the hospital staff excitedly posted on Facebook.

The new mothers and mothers-to-be give advice and support each other all the way. Those who have given birth share their experience and advice on how they can connect better with their patients and help them through the labor and birth experiences they will undergo. Additionally, their greatest experience being pregnant at the same time is the pieces of advice and support they have for each other.

Do you have any of these 4 subconscious fears? Take this...

Lifelong best friends since 6th grade were shocked to find they...