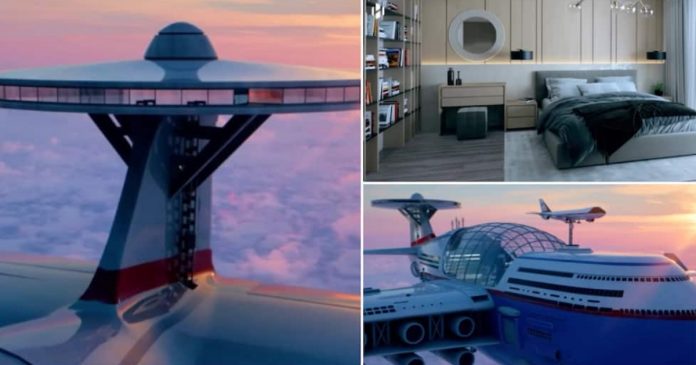 A few days ago, a nuclear energy-based airplane concept hotel was featured in a video by a YouTuber named Hashem Al-Ghaili. He introduced the Sky Cruise Hotel, a gigantic airplane-looking accommodation that can carry 5,000 passengers and does not need a pilot to fly. Additionally, it does not need to refuel, and it never needs to descend to land.

▼According to Al-Ghaili, the Sky Cruise Hotel uses nuclear energy fueled by a nuclear fusion reactor. The gigantic ‘flying’ hotel never needs to land. Hence, the passengers from various parts of the world will be alighting from different airplanes. The Sky Cruise Hotel, similar to all hotels on land, has extensive amenities, such as a shopping mall, gym, swimming pool, restaurants, cinema, theater, and a conference room located in a different wing of the hotel.

Couples can hold their wedding event in one of the flying hotel’s conference rooms and enjoy the 360° viewing deck at the rear area of the hotel.

▼Al-Ghaili best describes the Sky Cruise Hotel as the ‘futuristic transportation’ since it never has to touch base on land. Although its transport function is unclear, no actual number of crew members was required, and no one has actually seen it being flown by a pilot. “With all this technology, you still need a pilot? I believe it will be fully autonomous.” Al-Ghaili said.

The Sky Cruise Hotel was originally designed by Tony Holmsten, but it instantly went viral when science communicator and producer, Hashem Al-Ghaili, posted a video of its reimagined concept in 3D on YouTube. Some netizens praised Al-Ghaili’s design on the video saying that his concept is beautiful and full of creativity, but it is unreasonable. Nuclear fusion technology does not yet exist, and people doubt its proper application and testing, and it yet may need years to produce. Also, the gigantic Sky Cruise Hotel should require its own custom-made airport, wherein guests will alight from different airplanes to enter the hotel. Undoubtedly, the cost is unimaginable.

Al-Ghaili should consider these issues, including the security and technical issues that accompany them, among others. Safety concerns of the guests should be a priority. However, many netizens agree that Al-Ghaili’s idea is possible and may result in a technological breakthrough. Since many people believe that ‘whatever is conceived can be achieved, they look forward to its manufacture and one day be one of the pioneering guests on the first launching of the Sky Cruise Hotel.

Too expensive to buy one, tech developer creates real-time translator to...

15-yo teen invents sock sensor to keep his grandpa with Alzheimer’s...