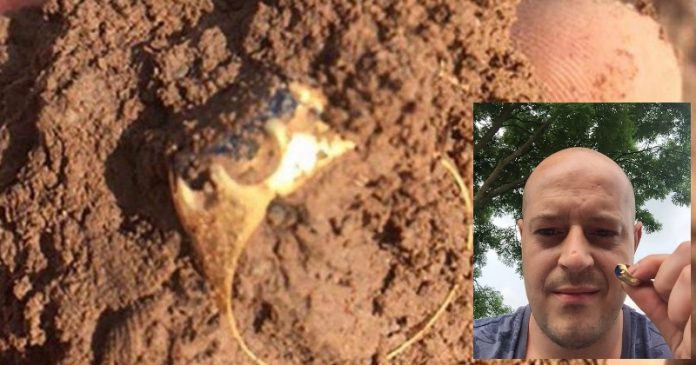 Have you heard of the legend of Robin Hood? As the tale goes: “The legendary thief who steals from the rich and gives to the poor”, he still upholds his values up until this day.

A medieval ring discovered in Sherwood Forest is believed to date back to the 14th century could be worth up to $90,000.

Mark Thompson, 34, who makes his living spray-painting fork lift trucks, was expecting to find something peculiar – perhaps some dropped money or rubbish left behind by holidaymakers.

But as he shoveled away at the soil he saw a glint of gold, and after removing the surrounding dirt he uncovered an magnificent piece of jewelry which appeared to be adorned with a lovely sapphire.

Expert auctioneers have informed him the ring could be worth anywhere between 20,000 to 70,000 British Pounds!

‘I called my friend who came down to take a look and help see whether there was anything else related nearby.

Aside from the ring, there were 2 other coins that were found.

“It’s the find of a lifetime – I never expected to unearth anything like that. I’m still in shock when I think about it – it was such an exhilarating moment.”

“If it does prove to be as valuable as we think it might be, it would completely change my life.”

“I’m renting at the moment and I’d love to be able to buy a house or move into somewhere more comfortable.”

Dot Boughton, a regional finds liaison officer, confirmed that the ring is undergoing tests at the British Museum and the case has been referred to the coroner so it can be formally classified as treasure.

It is believed the ring, which is engraved with an infant Christ on one side and a female saint on the other, also dates back to the 14th Century.

If it is, it will be valued by experts and offered to museums to purchase. Mr Thompson will receive the reward as the finder.

A Father in Vietnam Converts a Minibus into a Wooden Tank...