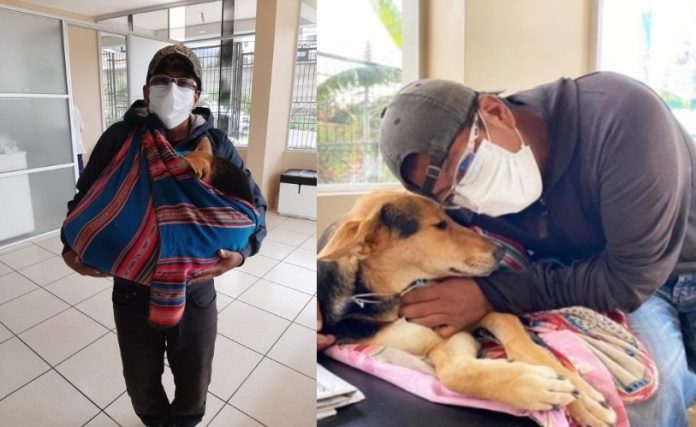 Dogs do everything for their owners, but there are also people capable of doing anything for pet dogs they consider their friends and one of them is Leonardo Leyga. We can just do so much for our fur babies, and most of us would go the extra mile to keep them safe and comfortable.

This man from Cochabamba, Bolivia, has started a network campaign to find the medical help his dog Chika needs. If this doesn’t seem like a wonderful act of love to you, you should know that this man walks through his city for hours, carrying his puppy in his arms to take her to the vet.

Chika’s case is very strange, the puppy suddenly stopped walking. “From day one to the next she did not walk any further,” so far no one has been able to explain to Leonardo the cause of his little dog’s paralysis and this loving owner refuses to leave her alone.

“I’m with her here, I can’t leave her because if I leave her I think she can die (…) I just want her to be safe and sound,” she said.

This man has such a strong bond to his little dog that he refuses to leave her alone and decided to set out to discover the true cause of her mysterious paralysis. Due to his struggle, Leonardo lost his job and is currently engaged in the sale of hand sanitizers on the streets of Cochabamba. Chika always accompanies him.

In the past months, this loving owner managed to contact the organization Patitas Descalzas (Barefoot Paws), who covered the expenses of a renowned veterinarian for the care of this little female pup. However, the treatment it requires is extremely costly.

You may read the story posted on Facebook here.

With the meager income generated by a small (informal) trade, Leyga will not be able to pay for Chika’s expenses, but he does not give up. For that reason, he decided to tell Chika’s story on Facebook and appealed to his readers. His case instantly has gone viral.

“The truth is that it hurts to see her like this. I have more puppies, I have more babies in the house (…) I’m needing a lot of support from people who can help,” he wrote on Facebook.

Help began to arrive but was not enough, Chika needs to undergo other tests. While the generosity of many has helped, Leonardo still does not leave her alone.

With Chika in his arms, wrapped in a blanket like a baby, this humble man has been seen walking for hours through the streets of Cochabamba.

Leonardo doesn’t know when Chika will get better but he won’t throw in the towel just yet, so he has to travel for miles, and the loving owner will do it just to see her standing up again.

Anyone interested in helping Leonardo and his pet Chika can contact him in Bolivia, directly through number 72766195 or where the dog is attended, in Veterinary Emergencies, at 77970901.

This man’s love is unmatched. Share Chika’s case and contact the foundation or its owner if you want to help her.

A Family Went Bankrupt and Resorted to Living on the Streets;...