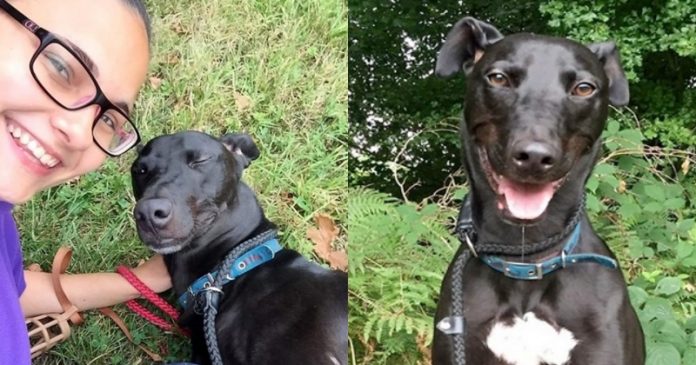 Every rescuer hopes that all the animals they save from an unfortunate life can get a new chance at having a loving home. However, things are not that simple, and after years of slumping and suffering on the streets, or at the hands of abusive owners, many animals have to wait a long time before finding true happiness.

Life in a shelter would be better than on the streets, at least they have food and a safe place, but there are rescued animals that don’t get adopted. At Last Chance Animal Rescue in the UK, they have been working on a case that has lasted for almost a decade.

A sweet dog named Monty has been waiting for a new home for 7 years. The black puppy arrived at the shelter in very poor condition. His crooked and injured spine was evident of the abuse he suffered in the past.

The shelter’s vet said that the previous owner kept him in a small box for a long time, which eventually damaged his spine.

Apart from that, he is also underweight and has serious self-confidence issues. Due to being an abused puppy, Monty became very afraid when dealing with strangers.

Meeting new people was no fun for him at all, and if someone approached him, the poor little dog would pee in fright.

Monty is an 8-year-old Lurcher dog. Shelter volunteers know all too well Monty’s fears and kindness because he has been with them since 2014. What they can’t explain is why no one wants to adopt him.

“Monty has been with us for almost 7 years, and no one has ever asked about him. He has a very hard time trusting new people, so he needs someone to show him that not all humans are bad,” said a spokesperson for Last Chance Animal Rescue.

Monty is a very sweet little dog with people he trusts, he is also a very loyal pet. However, Monty has problems interacting with other animals.

The presence of foreign dogs bothered him so much that Monty would definitely start barking when he saw them.

While it may sound a bit problematic, the truth is Monty is nothing more than a spoiled dog who deserves to find a family that loves him.

“Since he’s been with us, Monty has grown up well, he’s very affectionate with the staff and loves getting attention and cuddles on the couch, but of course, this takes time and patience getting there, and we want to be honest about the complexity. Monty really just wants a loving owner,” said a spokeswoman for the shelter.

Let us be the angel Monty needs, sharing his story and allowing him to quickly leave the sanctuary and find his true home. He deserves to be happy, too!