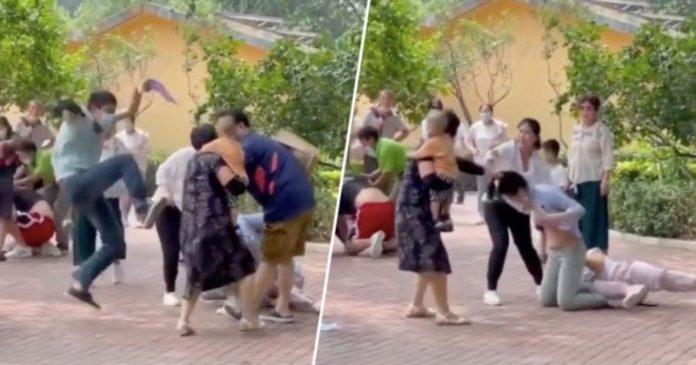 A group of tourists was reported to have been involved in a fight due to a misunderstanding. The incident is said to have taken place at a zoo located in Daxing District, Beijing.

According to a report in the Global Times, the fight took place on the early evening of Saturday, 7 August.

The fight between the two groups of visitors was initially just a verbal argument, but it turned into a physical fight.

Videos of the brawl started to become viral soon after.

The video, which lasted about a minute, showed that at least six people were involved in the fight. Some of them pulled each other’s hair, tore clothes, slapped, and even kicked each other.

The fight, however, was eventually stopped by security guards.

According to a statement issued by the zoo authorities, the quarreling visitors shouted at each other, tearing clothes until many other tourists, as well as animals at the zoo, witnessed the incident.

According to the statement, the incident was the first riot that occurred at the zoo.

In addition, some reports say, the animals who witnessed the incident mimicked the humans’ actions and started fighting with each other.

The situation was said to be out of control, so the zookeeper had to enter to settle the fight.

The fight was witnessed by other zoo visitors including children. Such a bad example for the youngsters to see. Sometimes, it raises the question in everybody’s minds: “Why are human actions worse than those of the animals?”

Farmer Finds “Ancient Copper Coins”, It Turns Out To Be Something...