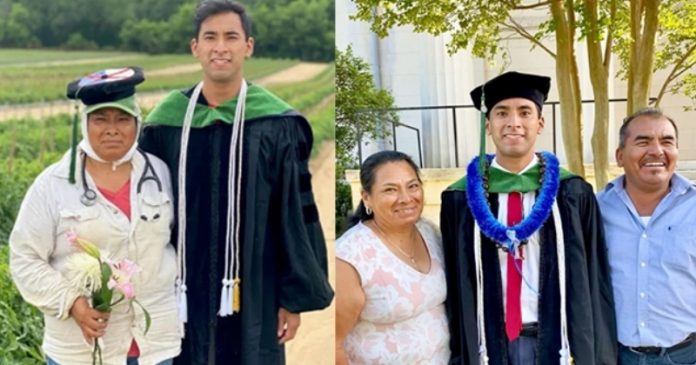 Many people say, “Surprises await those who are willing to go around the corner.” When you know you are on the right path, do not be afraid to take risks. Live your life to the fullest.

Years ago, Loreto and Maricela Juárez made the difficult decision to leave their home and move to the US in search of work.

They entered the US illegally from Mexico and ended up on a farm in rural Georgia. In 1986, they became citizens and raised five children on a modest farm laborer salary.

The way Loreto and Maricela work hard every day to provide for their family has had a huge impact on their children. Erick Martínez Juárez, their second child, dedicated himself to his academic goals from an early age to honor the sacrifices of his parents.

Every time he celebrates a new victory, it is important for Erick to return to the same field where his parents have been making a living all this time. “I can transfer that work ethic from the field to the books,” he said.

Erick kept this tradition alive when he graduated from the Medical College of Georgia at Augusta University this spring. He is now a neurology resident at UCLA Health.

He called this latest achievement a “lap of victory” for his family. To celebrate, he shared a photo of himself in his graduation attire, posing in the field with her beaming parents.

“My graduation from medical school was one small step for me, one big leap for the family,” he wrote.

“I wanted to honor my parents by showing them to my friends and the world,” says Erick. “What better way than showing the world how far we have come since they immigrated to this great country with nothing but a hard work ethic and clothes on their backs?”

Now, this is the American Dream! What a great example of how our struggles can help us achieve great things!

The Twins were Born 15-Minutes Apart. One was Born on New...