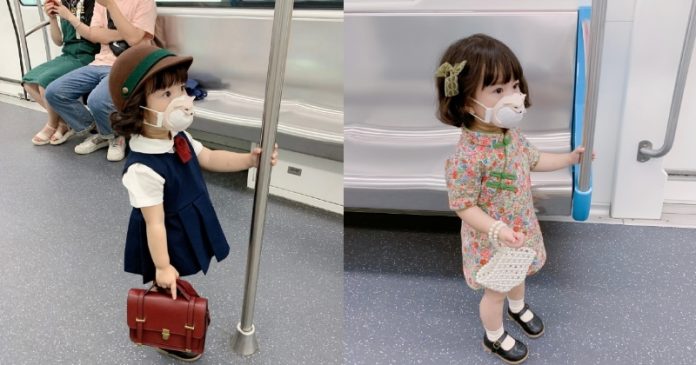 When most people are stressed or tired, they like looking at baby photos from a family or a friend’s album, photos from someone else’s mobile phone, or browse cute baby pictures online. After all, admiring their cute faces and funny gestures will really make people smile! Recently, photos online of a cute little fashionista girl have gone viral.

A photo of a cute little girl with short curly hair was shared online, which has circulated on the internet and became viral. Although this little girl was wearing a mask in the photo, she wore a dress that resembled a school uniform and had big doe eyes and fair skin. She carried a small brown schoolbag, which made her look very adorable and people could not resist but look at the mini fashionista.

She wore a Japanese-style elementary school uniform that made many netizens guess that she could be from a Japanese family. In addition to many citizens trying to guess her nationality, they also noticed that she often gave her seat space to an adult. Even though she is young, she stands firm and holds the handle tightly. She looks polite and elegant, and makes people want to approach and hug her!

Many of the netizens guesses were not correct. After many more photos of the little girl appeared on social media, a Chinese Weibo user “Galaxy Snail” claimed to be the mother of the little girl. “Posted more photos to shun the rumors about my child. She is actually a Chinese girl.” The mother usually likes to help her daughter dress up, and she accidentally caused the photos to be misunderstood by everyone.

After clarifying the nationality of the little girl, whose name is Mengmei, more netizens checked out Galaxy Snail’s social media, where you can find more photos of the little girl in the train wearing clothes such as beautiful cheongsams, elegant fairy dresses, and pink and black retro outfits. Yes, each outfit comes with matching bags and gadgets. Mengmei’s mother even said that she would stand in the middle of the carriage, just because “the subway is very empty, and the kids want to stand by themselves.”

In the mother’s parenting blog, you can see some beautiful dresses of the mother, too, and the little girl without the mask can be said to have big, round eyes and a chubby face. Wearing or not wearing a face mask, Mengmei’s photos can easily catch attention.

All kinds of princess outfits, leisure vacation styles, flame-colored outfits, even the bear costume photos are all heart-warming! Posing and smiling for the camera was never difficult for Mengmei, and she may grow up to become an artist!

After seeing the series of photos above, does it make you want to have a daughter as cute as Mengmei? Some people say that when you are bored with work, just look at the cute photos of this little girl on social media, and all your stress will be gone! If you want to see more photos, you might as well follow Galaxy Snail on Weibo!

This little girl has a doll-like face, and her outfit is also Japanese, no wonder she is often mistaken for another nationality!