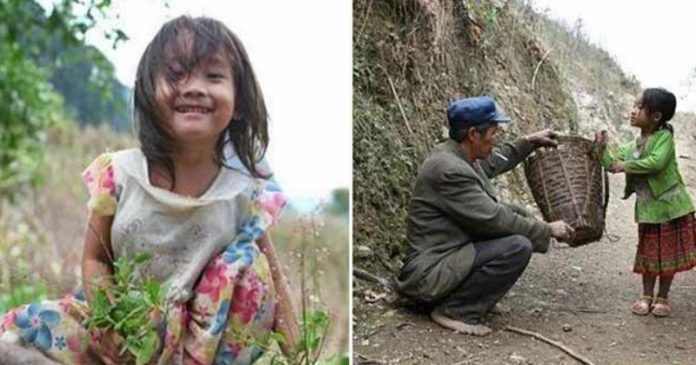 This huge mountain near the Yunnan border is densely forested, lush, and misty. Xiaoyue’s house was located at the foot of this huge mountain. A few years ago, 5 families were living there, and then everyone left the place. Now, only Xiaoyue and her Grandpa live there.

Xiaoyue’s mother is Vietnamese. She said that her mother was very beautiful, but she had returned to Vietnam 3 years ago because her family was too poor.

Xiaoyue’s father went to find her mother. After trying to look for her 3 times and failed, he finally gave up.

Xiaoyue is 6-years-old, and she is about to go to school, but her grandfather said that they are waiting for her father to return.

Xiaoyue’s father worked in Zhejiang and rarely came back, almost once a year. However, in Xiaoyue’s heart, her father was the greatest person. Although he rarely came home, it did not affect his strong image in her heart.

There was only one family left living on the mountain, and a sense of loneliness was inevitable. However, Xiaoyue who lives on this mountain with her grandfather has her own happiness, she has a small dog. It was her best friend.

It was a gift that Grandpa brought from the market. When her grandpa is busy, the little brown dog will accompany Xiaoyue, so that the child’s life will be much more pleasant.

Although the grandfather and granddaughter lived in the mountains, their lives were quite good. At the tender age of 6, Xiaoyue is good at doing housework, and she often cooks food at home.

One day, her grandfather ordered Xiaoyue to pick up vegetables from the fields and deliver them to her uncle’s house.

After picking vegetables, she took them to her uncle’s house at the foot of the mountain. Uncle welcomed Xiaoyue’s visit and asked her aunt to make potato soup for Xiaoyue.

Xiaoyue, who had not eaten meat for a long time, was very happy when she was given food. She said that her uncle and aunty were the people she admired the most.

After dinner, aunty bought Xiaoyue a new set of clothes for the Chinese New Year and tried it on, Xiaoyue said that they are very beautiful, and she is very happy. Her aunt said that Xiaoyue’s life was very heartbreaking, but she is a smart child.

Even though her life is tough, they hope she will mature quickly and live happily in the future.

72-year-old Woman in Japan is a Fashion Icon! Photos in Her...