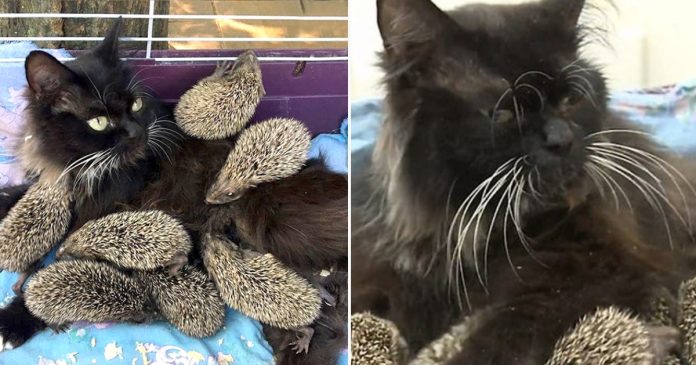 They may be of different species but that did not stop a mother cat from taking care of 8 orphaned hedgehogs who recently lost their mother shortly after giving birth.

When the 8 baby hedgehogs were born, instinctively, they look for love and affection from their mother. Hungry and looking for milk as they desperately need, unfortunately, their mother passed after they were born. Unexpectedly, they found a surrogate mother through a cat.

In the video that has gone viral, mother cat Musya was feeding them milk as they still could not fend for themselves and their sight has not yet been developed. The baby hedgehogs refused to be fed from a bottle or a syringe.

Fortunately, Musya still had milk from fostering other kittens and gave some to the baby hedgehogs. She doesn’t fail to provide milk and take care of them even at night! This is the most adorable sight to see… a surrogate mother from another species fending on babies like they were her own!