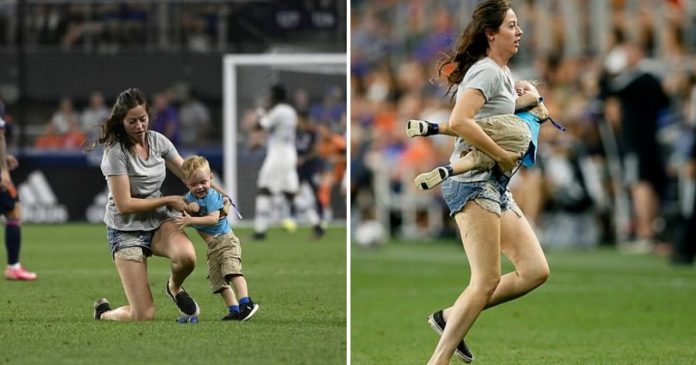 I think everyone has watched a lot of exciting events during the showcases! However, spectators should know that during an ongoing game, some unexpected situations are unavoidable. Recently, there was a football game. An unexpected situation involving a 2-year-old boy and his mother left the audience surprised!

Located in Cincinnati, Ohio, USA, a very interesting and surprising incident happened recently! In the second half of a major league football match, the audience was cheering and screaming for their favorite team. However, when the players wearing black and white jerseys kicked the ball to the other goal, an unexpected visitor appeared on the green football field. Mixed reactions came from the audience!

During an ongoing match, a little boy wearing blue suddenly runs into the field as if he was chasing the big players. Luckily, the players were running in the opposite direction, and they did not collide with the toddler. When his mom ran after him, the audience was shocked! The incident happened so fast that even the presenters did not notice…

When the little boy ran into the field, he looked back to see his mother run after him. She was able to tackle him down. According to the foreign media “9gag,” the woman is Morgan Tucker. She and the little boy were excitedly watching the game, when she found her 2-year-old son, Zaydek Carpenter, run into the field. Stunned, she hurriedly ran after her son and tackled him down, and quickly returned to their seats, hoping that it did not affect the game.

Although Tucker was successful in getting her son, she slipped before tackling him down due to the wet grass. Picking up her son, she was able to retrieve her glasses that fell before they hurried back to their seats. Cheers and laughter were heard from the audience. What a show!

Mom Tucker revealed to the media that she was too nervous at the time. She was afraid that her son would affect the game, and on the other hand, she was afraid of them being hit by the football.

“I was so embarrassed that I blushed!” Tucker admitted.

She did not know the real reason why her son ran to the field, though she speculated that he wanted to go near the athletes and play with them.

However, after a series of videos were shared on the internet, netizens were amused and left comments: “When the boy grows up, he can become a football player!”

“Fortunately, nothing bad happened to the boy and his mom!”

▼Let’s take a look at the video of the incident! Some netizens could not hold back their laughter~~~