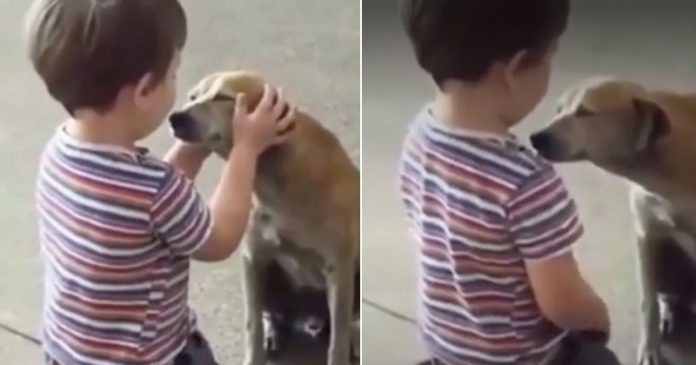 We can all imagine the hardships of living on the streets and this is not just about the plight of a homeless person, but also for animals. A stray dog tried to reach out to a little boy who in return did not hesitate to acknowledge him.

Although many wild animals smell bad and have fleas, that’s not enough reason to hate or shun them away. A simple gesture of love and affection from a boy who, despite the dog’s condition, has proven that he has a great heart in welcoming the strays that come his way.

A footage that has gone viral on Facebook and other social networks shows a boy aged between 4 and 5 years and is seen kneeling before a stray dog. A small gesture made the furry creature attempt to come closer.

The boy bent and knelt down to gently caress the little dog’s face and finally, it relaxed, feeling comfortable between the little one’s soft hands.

Although the footage is short, it doesn’t fail to send a powerful message to everyone about how important it is to always be humble and loving to furry animals like them.

The dog remained so calm and no aggressive behavior towards strangers, and he seemed to entrust friendliness to the boy. As the child caressed, the furry decided to savor and enjoy the moment of happiness.

Undoubtedly, the poor animal’s need for love is immense and the truth is evident. This makes the video even more touching.

The identity of the child was anonymous, surely the parents wanted it that way, though there were people out there who knew very well who the little angel was.

Through them, we would like to express our gratitude to the parents who have not only allowed the little boy and the stray dog to interact but have also made this little one a great human being.

The boy has a whole life ahead of him but his values and humanity are nurtured from an early age, we hope he continues to be as good when he matures.

We call out to other parents around the world to encourage their children to show kindness, through contact with those who need it most like this little dog.

These dogs found the lion with crippled legs so they decided...