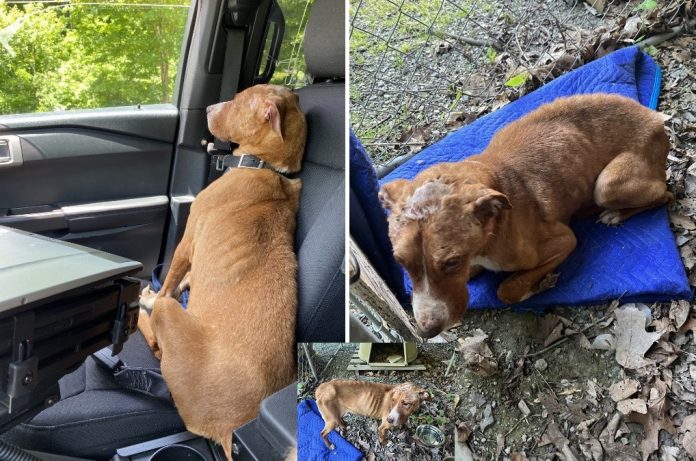 In the US state of Pennsylvania, there are laws implemented against cruelty to dogs. Such as, if the owner fails to provide proper nutrition and clean water to their dog, it will be an act of negligence, and it may be classified as a ‘summary offense’. If the owner inflicts pain or injury to the dog, it is an absolute violation of the third degree.

Crescent Township Police received a call on Tuesday evening from a resident who claimed that there was an abandoned dog near their house. According to the caller, the dog was led outside from a 4-door sedan that resembles a Chevy Impala. Then the driver threw a ball near an abandoned old house then drove off before the dog returned. The dog looked malnourished, and patches of hair were gone.

“The officers found that the dog was in need of food and water, as well as some love.” said a witness.

“The dog was returned to our station, where she consumed two bowls of food and water before laying down for some much-needed rest,” an officer wrote in a Facebook post. “She was transported to their facility by our officers, where she was treated to peanut butter and some much-needed attention.”

The dog has been renamed Crescent from her original name, Beans. The rescued dog is now resting in the Western Pennsylvania Humane Society in Pittsburgh under veterinary care, and the police are searching for the driver who abandoned the poor pup.

Crescent Township Police are urging everyone in the area to forward any information on the owner of the vehicle that abandoned Beans/Crescent. Apparently, in Pennsylvania, cruelty to animals is classified as a summary offense or misdemeanor of the second degree if a person inflicts bodily harm to an animal.

In a recent incident in Virginia, CCTV caught an owner abandoning a dog on a verge of death. Reports claimed that it was abandoned near a shelter at 2:36 AM and was found when they opened 7 hours later. The security guard at the Richmond Animal Care and Control shelter found the undernourished dog.

“He miraculously managed not to freeze to death in the seven hours he endured and pulled himself from his hiding spot to the sunshine at 9:30 AM,” wrote the shelter on Facebook.