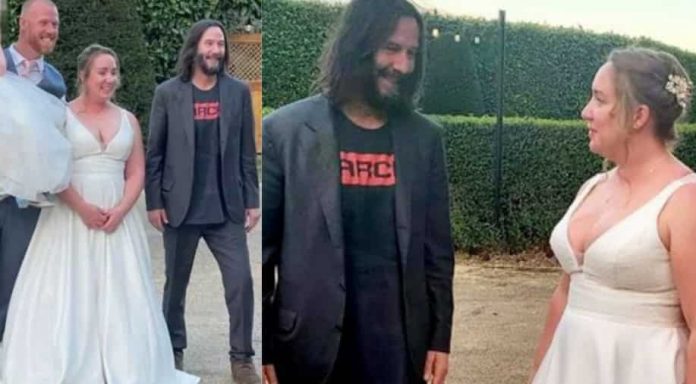 57-year-old Keanu Reeves, star of the John Wick saga, surprised a married couple at their wedding reception at the Fawsley Hall Hotel in Northamptonshire, England. Incidentally, both the bride and groom are avid fans of the action star and did not expect the celebrity to appear on their special day an hour after the groom invited him while chatting at the hotel bar.

The couple, 35-year-old customer sales rep James Roadnight, and 34-year-old Nikki, who works with dogs, were very grateful to Keanu for coming to their wedding reception, even at such short notice. James and Nikki met through a dating app and have been together for 2 and a half years. They admit that Keanu Reeves’ appearance was the ‘icing on the cake’ of their wedding day.

They were unaware that the Hollywood celebrity was staying at the same 4-star hotel with them, with rooms having prices ranging from £266-per-night and reaching up to £495. Keanu Reeves was working on a documentary on Formula 1 which will soon be available for streaming on Disney+.

Nikki recalled that her husband and Keanu met earlier at the hotel bar and asked the celebrity to join them for drinks at the wedding reception. They had a wonderful conversation, and Keanu mentioned that he just got off a plane and will be staying at the hotel until his work with the documentary is done.

In an interview with Newsweek, Nikki said: “My husband saw him in the bar area and told him he’d just got married and invited Keanu to come over to say hello and have a drink with us if he wanted to. He was very friendly and said he would later on. We didn’t know if he would or not, but it was cool that my husband had spoken to him!”

All the wedding guests were thrilled to see Keanu Reeves making the event a special one for the married couple.

Beaming, Nikki said: “He was so kind and friendly and congratulated us on our wedding. He was kind enough to do some pictures, and our wedding photographer was able to capture some too! Then he took the time to speak to some of our guests and have more photos done! For it to happen on my wedding day was out of this world. He held my hand, gave me a cuddle, and said congratulations – it was just surreal. At the time, my bridesmaid had been fixing my dress when somebody from the venue said, ‘there’s a special guest outside’. I walked into the courtyard, and there he was. Keanu Reeves was at our reception. I think I blurted out some words like, “Welcome to our wedding. My name is Nikki. Do you want a drink?” He said he’d had a long flight and politely declined before spending about 10 or 15 minutes having photos with us all. Towards the end, there was a bit of a mob of fan girls swarming around, and I even said, “do you want me to help escort you out?” He said it was fine and continued to make time for everybody – he was just the sweetest guy.”

While on their honeymoon in Crete, Nikki said: “I was blown away. Keanu Reeves is my favourite film star so if I could have picked anyone to meet it would be him. He was just so humble and kind. I got the impression he was genuinely happy to be there too. He didn’t have to come over, but he went out of his way to do so, and it’s something we will remember forever. I am such a massive fan of the Matrix films, I have watched them over and over, and I had a crush on him in the Speed films too. What girl didn’t! My late uncle, who couldn’t be with us, was a huge fan of his, so it was quite fitting Keanu turned up. He would have loved it. We have friends in Florida, and our wedding pictures have been on the news there. We are just normal people. Things like this don’t happen to us! It’s all been very bizarre.”

James added: “Earlier in the day, I was at the bar, and a member of staff said Keanu Reeves was staying. So me being me, I went out to the beer garden where he was having a pint to introduce myself to him. I shook his hand, told him it was my wedding day, and said it would be great if you could come to the reception later. I said my wife would love to meet him and that he couldn’t miss her because she was the one in the big white dress, and he laughed. He said congratulations and was just wonderfully friendly and down-to-earth. I told him there was no pressure and not to feel obliged to, but the offer was there if he wanted a drink with us. He said he’d see what he could do, but he was just about to have his dinner, so I went off and thought nothing more of it. We carried on with the evening, and I was on the dancefloor when our wedding photographer told me we had a VIP outside. I was so happy he came. It was just the cherry on top of an already magical day. He spent lots of time having photos with us and also our guests. He was just so humble and was such a normal guy. But he still had this big presence and personality of a film star. He just had that special aura that he has in his movies. We love the Matrix and all the John Wick films. My mother-in-law got everyone to shout ‘Speed’ when she took their photos. That was pretty funny as it’s obviously one of his older films, but still a good one, though. He was a top bloke, and we were so grateful he gave his time up for us to make our big day even more memorable.”

Keanu Reeves is known for being entertaining to his fans anywhere in the world. Making a special appearance at a couple’s wedding made it extra special for the newlyweds. There was also a time when a little boy approached him at the airport, asking many questions and autographs. Keanu did not have the slightest annoyance in him. He was patient with the boy and enjoyed his conversation with him. The Matrix star is truly a role model not only to the showbiz world but also to everyone.