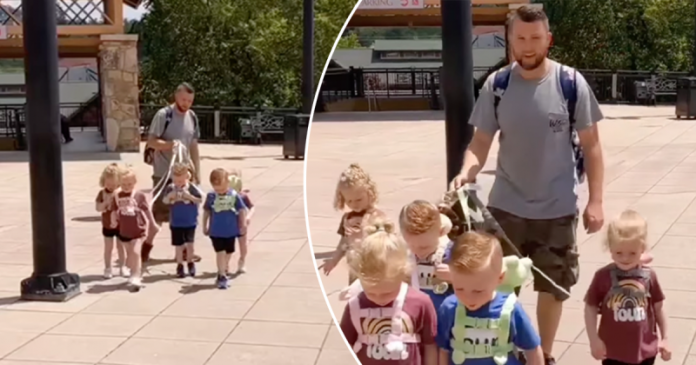 Using leash straps on children may have its advantages and disadvantages. Parents use these to avoid their children wandering off when they are in public places. Some concerned citizens see this as abuse to the children, while other parents who understand see it as a way to keep the children close. Child specialists say that child supervision may depend on how the parents raise their children.

A 31-year-old father of quintuplets, Jordan, uses leash straps on his children while they are out for a walk. According to him, using straps is better than pushing strollers which may be inconvenient in crowded places. “Kids are very curious – they want to run and explore,” says Jordan.

Parents around the world resort to a similar way of walking their children in public places, though most people bash this method of supervision. They say that children should be given the freedom to move around and wander, and not be treated like animals as such. Some netizens are questioning Jordan’s way of supervising his kids in public places. They said, “Why couldn’t he just train the children to walk close to him? Don’t have many children if you can’t manage them.”

A survey claims that 99.9% of parents know what is best for their children. If the public cannot see the problem within a family, that doesn’t mean there is not any. Only parents who have undergone the same situation would understand. Fortunately, some experts do not disagree with Jordan’s method of supervision. Dr. Deborak Gilboa, a parenting and youth development expert, encourages the public to analyze deeper into the issue before they dispute.

According to Gilboa, using leash straps on children can be a solution to kids going missing or wandering off to someplace else, especially if you are handling children more than 2. Alternatively, you may stay home if going for a walk is unnecessary. Very young children do not understand the need to stay beside their parents and siblings while in public. However, Gilboa says that parents should no longer use the leash straps once the children reach the age of 7 or 8. “At that point, you need another way to control your child in public,” said Gilboa. “It will definitely feel awkward if an 8-year-old child is still wearing a leash.”

Other specialists understand that this method helps parents manage and control their children, though some of them disagree. A chairman of the Council on Injury Prevention at the American Academy of Pediatrics, Benjamin Hoffman, is one to disagree. According to Mr. Hoffman, “They do not have data on injuries related to leash straps, and they also lack information regarding the reasons and benefits of how to properly use them.” Mr. Hoffman claims that he has personally encountered parents pulling the leash straps by force resulting in children falling backward and causing injury. Some may result in worse situations wherein the child may have an injury to the head or limbs.

Mr. Benjamin Hoffman strongly discourages the use of these leash straps on children. He recommends a stroller for smaller children than using a leash. In one way or another, an injury may be likely to happen when you drag or pull the child.

On the neutral side of the situation, Adam Spanier, a professor of pediatrics at the University of Maryland School of Medicine and a pediatrician at the University of Maryland Children’s Hospital, says that the use of leash straps on children is a ‘parent’s personal decision.’ “This may be a product for children who tend to wander if not closely supervised, for children with developmental delays, and for children with impulse control problems,” said Adam. Although, he also agrees with Mr. Hoffman’s notion of not ruling out the danger of injuries that are likely to happen when using leash straps. Additionally, it may also have a psychological effect on the children.

-> Here are some tips for parents who are planning to use a harness on their children while in public places:

• Use a backpack-type of straps rather than the lanyard that can be tied to a child’s wrist.

• Ensure the appropriate size that is comfortable for the child. Double-check the instructions included in the packaging to know more about the product.

• Research more about the pros and cons of a leash strap product before deciding to buy one. Additionally, read the customers’ reviews to be educated about the safety features of a product. Think twice before you decide once.

• Always keep in mind that a leash strap is only a simple tool to keep the children supervised and close to the parents in public places. Parents should be calm when using leash straps to avoid injury to the children.