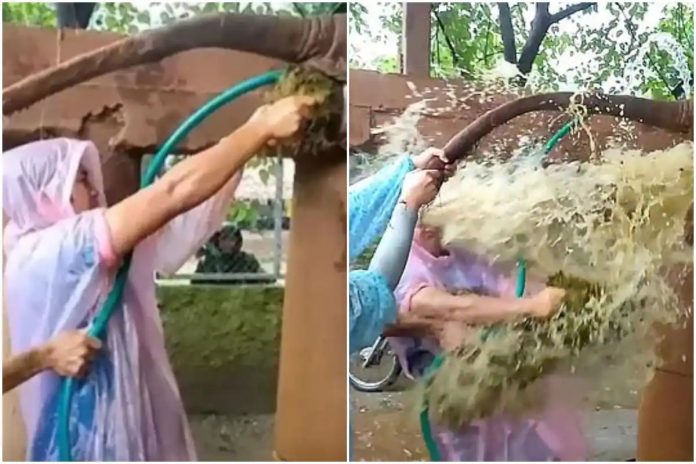 If you think your day job is tough, some people handle much more difficult tasks than we do. Doctors, lawyers, and firefighters are some of the workers whose careers can be tougher than any others. In late 2020, a veterinarian in Thailand proved that ‘dedication’ is a must as a part of a career seeker’s job qualification. Fortunately, most people love their jobs and hold on to their careers until their retirement.

Dedicated veterinarians in Elephant Nature Park, Chiang Mai, Thailand, helped an elderly elephant named Lana, who was suffering from severe constipation. Due to the elephant’s old age, she was having difficulty with gastrointestinal mobility. Lana needed to be assisted in releasing her blocked feces. To relieve Lana of her severe constipation, the veterinarian and his assistants had to do an ‘enema’, a process done to relieve constipation and cleanse the colon.

During the process of the enema, the veterinarian in a pink raincoat pulled on a huge hard shard of accumulated feces, while the other female vet held on to its tail and another vet held on to a hose while applying water to the elephant’s rectum. If the elephant accumulates more feces on its intestines and not be able to defecate properly, it can cause her life. Fortunately, the veterinarian was successful in pulling out the large feces that blocked its intestines, then a large amount of brown water gushed out of its rectum, showering the veterinarians on their faces and backs.

Although the 3 veterinarians were caught off-guard, they were quick enough to turn their backs when brown water rushed out of the elephant’s rectum, but not before they were sprayed with some of the water on their faces. But for them, it was all in a day’s work and they laughed at their small misfortune. On the other hand, they were very successful in relieving Lana of her constipation. Surely, the elephant is grateful.

A short video clip was shared on a Facebook page by Samui Elephant Sanctuary. Although some of the netizens found the video hilarious, most of them showed gratitude and paid tribute to the 3 veterinarians who helped Lana. Here are some of their heartwarming comments:

“Thank you, veterinarians, for your efforts.”

“Thank you to all the medical staff for their sacrifices.”

Due to her old age, Lana is prone to digestive problems and was given a special diet to resolve her constipation. She was given good treatment by the veterinarians and has improved so much. Thank you very much, Doctors!