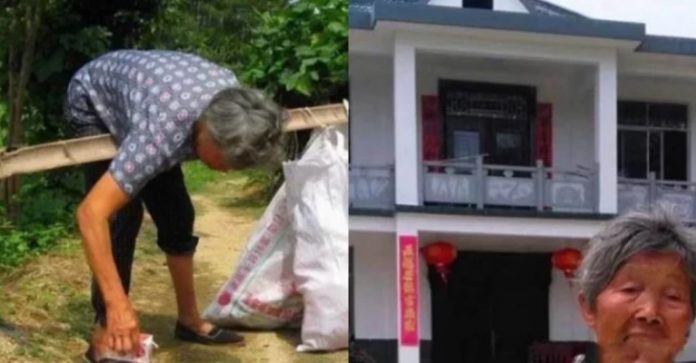 Life is full of surprises, and we live for decades to appreciate all the blessings we receive each day. Learn to be grateful. With gratitude, everything will be beautiful. Do not take anything for granted. Be independent. Be courteous and respectful of the elders.

76-year-old Hu Xingzhen from Anqing, Anhui Province, China, was born in the countryside to a poor family. In 1992, she encountered a baby less than 40 days old who was abandoned 6 times and was never picked up again. She found the baby very thin and crying, though nobody cared to pick her up. Worried, Hu Xingzhen did not hesitate to bring the child home with her. She has never had any children of her own, so she treated the baby like her own daughter.

Life was very difficult for Hu Xingzhen and the child. She could not afford to buy milk powder for the baby, so she made rice milk from the raw rice grain she cooked, instead. Hu Xingzhen switched to rice paste and sorghum paste for her adopted daughter to drink while growing up. While she was sleeping, Hu Xingzhen took advantage of this time to go to the fields and dig for some wild vegetables for her to eat. She raised the child as her own, saved some money, and guided her as she grew up.

When the child was 4 years old, misfortune fell on the family. Hu Xingzhen’s husband fell down the stairs and was bedridden for 18 months. He died after. She and her daughter lost the only person who supported them through the years and lived a more difficult life, which was a burden to Hu Xingzhen. People in the neighborhood urged her to let go of the child and have her adopted, but Hu Xingzhen strongly opposed it. She was determined to raise her daughter on her own. To support her daughter, she would go to the village every day and bring a large plastic bag. She would pick things up which were suitable for recycling. More than 20 years later, her daughter grew up to be sensible and well-mannered.

Years passed, and her daughter finally married. She also has children of her own. The daughter, now with her married name Wang Donghong, took Hu Xingzhen to live with her family in the country town. Hu Xingzhen felt disoriented at first and decided to go back to her hometown.

Reminiscing her childhood days, young Wang Donghong recalled her elementary school days. Every day, her mother would pick up objects for recycling and would pay her tuition fees with the money she has saved. Now that she has married, she could visit her mother every 2 or 3 days. One day, she had a good conversation with her adoptive mother, and with endless gratitude, Wang Donghong said, “She raised me when I was young. Now, I take care of you. You raised me well until I grew up, and I will accompany you now that you are old. When I was young, you were my dependence. While I was growing up, you were my backer. No matter how old you become, I will hold your hand and walk with you slowly.”

Wang Donghong built a villa for Hu Xingzhen in her hometown. Her 20-plus years of raising her daughter did not go unrewarded. Although they both lived a life of difficulty, her daughter grew up to be a good and sensible woman. When she had a family of her own, Wang Donghong repaid her kindness and gave her adoptive mother so much heartwarming gratitude. “The elderly woman who has suffered for most of her life can now live a good life. I hope she can spend her old age in peace and wish my mother a long and healthy life,” Wang Donghong said.

Children who do nothing at home are very unhappy. When they grow up and become parents, they have many things to do at home and are still unhappy. Parents are usually happy when they have the company of their children. It is also said that parents are the first teachers to enlighten their children’s minds. On the other hand, offspring are also the first teachers of parents. From the first day you become a parent, both parents and children should learn how to love others and be grateful for the blessings received.

Most children who are grateful for their parents have this to say, “You give me luck, and I am forever grateful! Thank God for giving me wisdom. Thank my parents for giving me life. Thank you for having you in my life! The greatest love is the love of parents and our gratitude.”

Parents should also instill filial piety in their children. It is the best gift the children can give to their parents. One regret in life is being unable to provide filial piety to your parents when they were still alive.

When Wang Donghong married, she provided so much gratitude for her mother’s undying perseverance to raise her. In return, she built a villa for Hu Xingzhen. With so much happiness, she said, “I really did not expect to live in such a good house in my lifetime.”

If you want to live a life with little to no regrets, you must thank your parents for the little things they do for you while they were raising you. When your time comes, repay their kindness with love and gratitude. Then more blessings will come to your family and descendants.