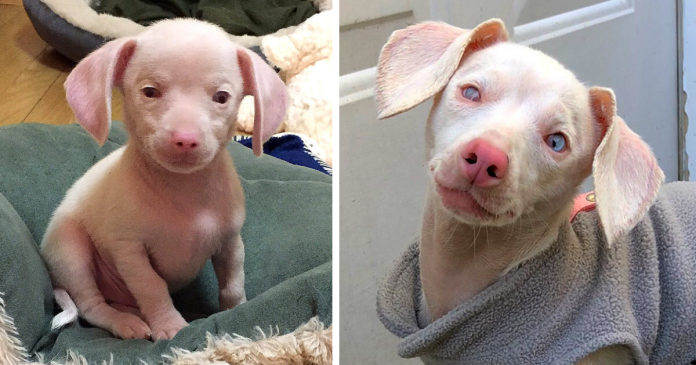 A puppy was nicknamed Piglet due to his pink coloring when he was born. He was adorable and very beautiful, but needed the love and affection of a family who is willing to adopt him regardless of his inborn disabilities. Piglet is deaf and completely blind.

2-and-a-half-year-old Piglet is a pink-colored Dachshund and Chihuahua mix who was rescued by a Connecticut-based vet named Melissa Shapiro. She saved the puppy from a Georgia hoarding facility overcrowded with 37 pups. Initially, Melissa only wanted to foster Piglet for 2 months or until he finds his ‘forever’ home. While Piglet was under Melissa’s care, she fell in love with the puppy and felt that he belonged to her.

Although Melissa already had 6 dogs, she did not mind adding Piglet to the family. With his disability, Melissa had to make a lot of effort to take care of him, but he was worth it, and she never had any complaints. In an interview with PEOPLE.com, Melissa said, “The decision to adopt Piglet full-time didn’t come easy since I had six other dogs. It was quite a decision to make. He is a lot of work, and he is like a full-time job, taking care of a little disabled baby. But he’s so cute, and we couldn’t give him away at that point.”

Whenever Piglet gets anxious, which was most of the time, he would scream to get Melissa’s attention. Piglet is very devoted to Melissa and, initially, had separation anxiety that she could not leave him at home for a month. “He was so anxious he was screaming constantly. He would play, then go to sleep, but when he wasn’t doing either of those, he was screaming. I couldn’t leave the house the first month I had the dog here,” Melissa recalled.

After a few months, Piglet settled into a routine and finally became familiar with his surroundings in Melissa’s home. He loved playing with his siblings, going on walks with them, and traveling with Melissa when she was on a business trip. There was no stopping Piglet despite his disabilities. He was happy.

A 3rd-grade teacher heard about Piglet’s story and wanted to share it with her class. The teacher from Plainville, Massachusetts, shared with them Piglet’s plight and how his positive attitude had helped him surpass all challenges he faced in life. She encouraged the class to accept and embrace life’s dissimilarities.

The students made use of their inspiration towards Piglet to initiate a growth mentality called “The Piglet Mindset.” They were told to ask themselves, “What would Piglet do?” whenever they were faced with a difficult situation. The kids sent Piglet a card with all the appropriate descriptions that apply to him with a beautiful photograph of him in the middle, which both Piglet and Melissa appreciated.

Piglet and his family opened a fundraiser for rescue dogs with special needs just like him. There was Piglet merchandise for sale, such as t-shirts, stickers, magnets, and bags. They have raised more than $30,000 as of today. Piglet’s website also has a wide variety of PDF files for download to utilize inside classes. He has become an inspiration to humans and dog owners, especially the ones with rescues who have special needs. Piglet has become the epitome of hope and tirelessly promotes adoption and warms the hearts of everyone around the world.

Although Piglet had a difficult life after he was born, he has become a symbol of acceptance and hope. He and Melissa will continue spreading inspiration to people and assist individuals who need motivation and determination. Piglet’s story has motivated people to adopt pets and persevere with the ones that have disabilities like him. Additional maintenance may be required, but undeniably worth it. Foreign media DailyMail UK claims that Piglet now lives like a Prince and has the best times of his life, spreading the ‘positive mindset’ to people, especially children.