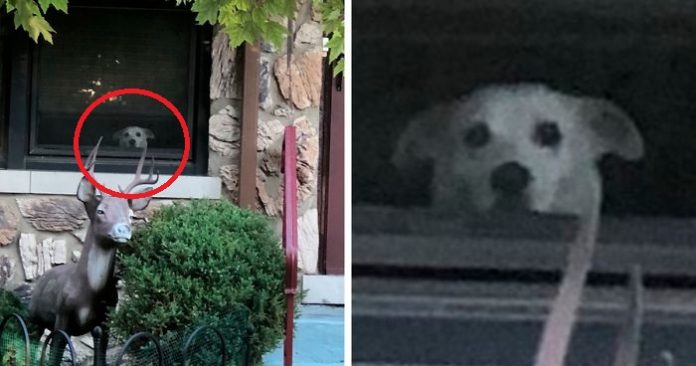 Upon returning home, some people have the habit of acknowledging their presence to their family in the house. Even the pets happily run to their master and wagging their tails mean they are happy seeing their arrival.

Some pet owners have gotten used to furry babies waiting for their return home after a long day at work. The same is true for Roman, who helps run a medium-sized carrier company and an optometrist in Chicago, USA.

When Roman comes home from work every day, he habitually looks up at the window first because his dog Toby is always there waiting for him.

This heartwarming and habitual behavior lasted for a full eleven years.

Recently, however, Roman had to go through a very painful situation. Toby, the dog who had been with him for many years, has passed.

The once happy fellow who waited for him to come home no longer appears anytime soon on his window.

Although Toby has been away for several years now, Roman comes home from work every day and still subconsciously looks up at the window.

But all is just in vain. He will no longer see his beloved dog on his window.

Roman and Toby met 14 years ago when Toby was only two years old and was the dog of his girlfriend at the time.

When they first met, Toby pooped in Roman’s living room, which caused Roman’s first impression of Toby to be a brat. They did not get along very well at first.

The clever Toby is a very clingy dog. He wants to get attention from Roman all the time, so he is always naughty and mischievous. This gives Roman a headache, and often quarrels with Toby over various trivial matters.

Finally, his girlfriend persuaded Roman and said: “Just treat Toby like a human kid, don’t always be angry with him.”

After a few years, Roman and Toby have become inseparable, and their relationship even surpasses the relationship between his girlfriend and Toby.

A few years later, Roman broke up with his girlfriend, and because he couldn’t live without Toby, Roman gave the house to his girlfriend.

The years have changed, and the people around him come and go. Only Toby has always been by Roman’s side…

During the following years he spent with Toby, Roman never felt lonely.

Roman usually works as an optometrist and spends 8-10 hours at work every day. Gradually, Toby understood the pattern of his work hours.

He would lie down by the window, waiting eagerly for Roman to come home from work.

As soon as he sees Roman’s car appear, Toby becomes very excited. He then shakes his head and waits for Roman to walk to the door…

Even if Roman only went out for a few minutes and then went home, Toby would be as excited as he hadn’t seen him in many years.

Waiting has gone through day and night, spring, summer, autumn, and winter, year after year…

A year after another, Toby habitually waits for his master to come home.

In Roman’s heart, Toby is a perfect dog that cannot be replaced. He is gentle and polite and treats children with extra gentleness.

Sadly, Toby had cancer and has undergone multiple surgeries, including dilated cardiomyopathy, and his health has not been very well. After three major operations, he was diagnosed with cancer and stage 4 kidney failure in October 2018.

By February 2019, Toby’s body had become very weak and unable to swallow.

Unwilling to see Toby suffer anymore, Roman and his friends bid Toby farewell. He decided to take Toby to the vet for euthanasia…

Toby has been away for several years now.

But Roman’s habit of looking at the window could not be avoided. He always felt that Toby had always been there and never left.

Toby used love and happiness to give Roman the warmest and most perfect companion so that Roman’s life is full of sunshine and color. Toby is also like every furry baby around us. Although they occasionally make trouble, they are always there, a faithful companion.

Gradually, they become our most loyal friends and, sometimes, a part of our family.

▼ People have sent their condolences to Roman, appreciating his special bond with Toby.

For dog lovers anywhere, what has your fur baby done that has imprinted on you?

Drone captures rare moments of dolphins and whales engaging in a...