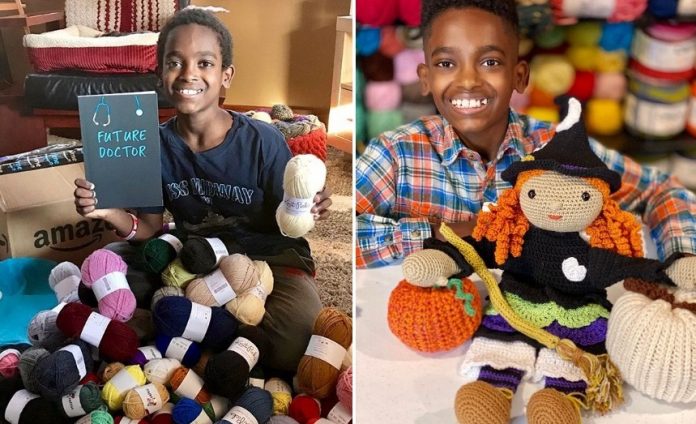 To most people, crochet is a craft done by grandmothers and young women. However, a young boy from Wisconsin developed a strong interest in crocheting after watching instructional videos at the age of 5. Starting young, he has acquired the skills and gradually learned how to make caps and sweaters, among others. His products have become popular on the internet, and some netizens are interested to purchase.

Originally from Ethiopia, East Africa, 14-year-old Jonah Larson was adopted by Jennifer and Christopher, and currently lives in La Crosse, Wisconsin. When he was 5 years old, Jonah watched crochet instructional videos on YouTube and immediately felt interested in the craft. Soon, after learning the basics and acquiring the skills, he could make products like gloves, blankets, and scarves.

Jonah’s superb crocheting skills amazed his parents. He shared photos of his works on the internet, and he did not expect them to become popular in a short amount of time. With the help of his mother, Jonah was able to sell some of his products. Soon, orders started pouring in. When Jonah was 11, he received 3,500 orders and was called the youngest ‘King of Crochet’.

The orders soon piled up beyond their expectations. Jonah had no choice but to select only the orders that were easy to complete for a short time since he had no assistance in making some of the ordered products.

Jonah uploads photos of his works on his Instagram page from time to time. His followers increased from 200,000 to 357,000 and received several messages from them. His crocheting ability has earned him support from netizens, and most of them are interested in learning from him. His followers call him “Child Crochet Prodigy.”

When Jonah’s mother, Jennifer, realized that he was very much interested in crochet, she began to worry that the kids in school may bully him. Fortunately, it turned out to be the opposite. His friends and schoolmates were very supportive of his hobby. Aside from being a prodigy of the craft, Jonah is also good at his schoolwork. With his high IQ, he skipped the 1st grade and proceeded to the 2nd grade when he started school. He hopes to be a doctor someday, specifically a surgeon, but he claims that he will never give up on crochet.

Jonah also hopes to use his talent to raise enough funds for his hometown in Ethiopia and to help homeless children in need. “The orphanage where I was born is now gone, so the orphans now need care more than ever.”

Jonah is kind and smart. Despite his popularity, he never forgets to help children in need. When he grows up, there is no doubt that he will be a great achiever.

The most elite Taekwondo team in the world wows the audience...