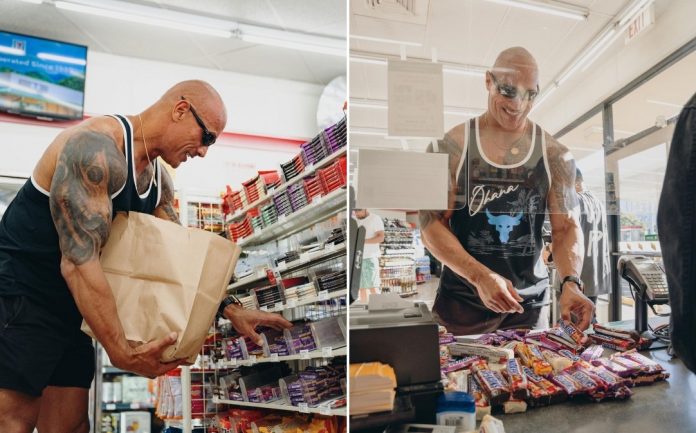 WWE Champion and Hollywood celebrity Dwayne ‘The Rock’ Johnson has retired from his professional wrestling career and is known for blockbusters such as “The Scorpion King”, “Skyscraper”, and the most recent DCU movie, “Black Adam”. His success in the showbiz industry has earned him fans all over the world.

Recently, he caused a heated discussion on the internet when he posted a video of him entering a 7-11 store in his hometown in Hawaii on his Instagram account. He revealed that when he was 14 years old, he used to go to the same store and steal a large-sized Snickers bar before he works out at the gym, and at the time, had no money to buy the chocolate. The memory imprinted on him, and he has never forgotten it.

“I have been waiting decades to do what I’m getting ready to do now,” he says in a video he posted on Instagram.

USAToday reported that the family of Dwayne was not in a good situation financially in the past, and every time he went out to exercise for his daily workout routine, he would go to a 7-11 store near his home and steal an extra-large sized Snickers chocolate bar as his pre-workout supplement for the day. The clerk knew young Dwayne’s financial situation at the time and turned the other way, pretending not to witness the incident. The ‘stealing’ situation lasted for a year.

“I was as broke as hell, and the clerk just turned her head and never busted me,” Dwayne said.

Dwayne always remembered that certain memory while growing up, and he felt that it was unacceptable even at a young age. When he recently returned to his hometown in Hawaii, he decided to return to the 7-11 store where he used to steal the chocolate bars. Upon entering, he headed straight to the shelf where they kept their Snickers chocolates and got every single piece. At the counter, he placed them on the table and paid for every piece.

The ‘Black Adam’ star told his story to the clerk at the counter, how he stole an extra-large sized Snickers chocolate bar every day. “I did that for almost a year every day,” he said. “I had to come back now and buy every Snickers bar on those shelves to make amends.”

After paying for the Snickers chocolate bars, he left them on the counter. He did not intend to bring them home. He mentioned that it was for everyone who was there inside the store at the moment and to get as many as they want. “I leave these Snickers here. If someone looks like they want to steal it, they don’t have to bother. Just take these away,” he said to the clerk at the counter.

While Dwayne was still at the counter, he paid for the tab of everyone at the store. He paid $298 in total. Before leaving 7-11, Dwayne posed for photo ops with the staff and other people inside the store. “After decades of me wanting to come back home to 7-Eleven and try to make good, that felt really, really good,” he said towards the end of the video. “We can’t change the past and some of the dumb stuff we may have done, but every once in a while, we can add a little redeeming grace note to that situation — and maybe put a big smile on some stranger’s face.”

Do your best to make amends for past mistakes. It is never too late for anyone to claim redemption. In the end, you will feel more at peace with yourself and with your surroundings.

This simple test can reveal something about your personality, depending on...