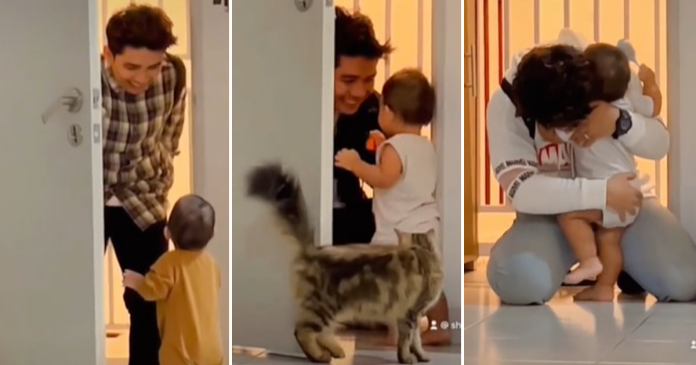 Recently, a video on TikTok, which was shared on other social media platforms, went viral. It shows a father coming home from work and being greeted by his baby son. Seeing his son’s antics while running to greet him made all of his exhaustion disappear.

The video was captured and shared on TikTok by @shuhadaasyikinn, the baby’s mother. She uploaded the video in time for her husband’s 29th birthday on November 6, with Shuhada Asyikin delivering a heartfelt message for him. She wished him good health, long life, and an abundant livelihood. Towards the end of the video, she thanked her husband for all the sacrifices he has been through for their son, Liam. In other social media platforms, the video shared has a background song instead of the wife’s message.

Throughout the minute-long video, the baby can be seen running toward the door as his father comes home. The young man slowly and carefully opens the door so his baby will not get hit. No traces of fatigue or stress can be seen on the young man’s face as he kneels to welcome his son with open arms. The father’s happiness is reciprocated by the baby’s excitement as he comes home.