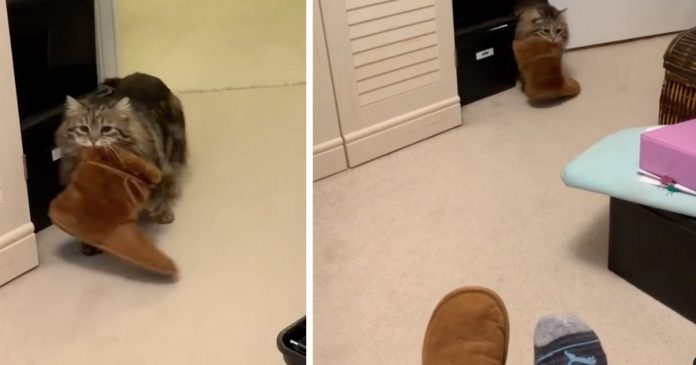 A comparison photo of Lulu before and after she was adopted has broken a lot of netizens’ hearts. Lulu may have been lucky to be rescued, but there are many other stray animals who need a loving and caring family.

Lulu is one of the lucky felines to have found the perfect forever home, and now she has a unique way of showing her love and affection to her human mom. She shows her gratefulness every morning by bringing the pair of slippers to her mom. The gesture may be unusual, but it warms the heart of Lulu’s owner.

Lulu’s daily routine started when she adapted to her home a few months after she arrived. The furry feline learned that her mom loves wearing her slippers whenever she walks around the house. Smart Lulu started bringing Mom her slippers early in the morning when she awakes. No matter where she leaves her slippers, Lulu will find them and bring them to her owner one by one. The grateful cat would also go up the stairs and bring it down to Mom.

There are times when Lulu likes to toss the slipper down the stairs rather than carry them. When she reaches the slipper at the bottom of the steps, then she will bring it to the owner.

Lulu’s mom appreciated the gesture, and although the slippers were full of cat drool, she still wore her favorite home footwear.

Lulu’s human sister, Kayla said, “My mom was surprised the first time it happened. She wore the drool-covered slippers to encourage Lulu.” Initially, Kayla was not convinced that a cat would fetch slippers for its owner. Is that possible? Stories say it is more of a dog’s gesture to bring things to their owners, but a cat? Kayla gave it the benefit of a doubt.

“I didn’t believe her until she got it on camera,” Kayla told The Dodo.

Kayla opened an Instagram page for Lulu on April 4, 2020, called Lulu (The Slipper Cat). The first video she shared on the page has been viewed over 5,000 times. Garnering this many views, Kayla posted another video with Lulu fetching the 2nd slipper.

The gesture has been Lulu’s daily routine to show how much she loves and cares for her mom. This kind gesture is her token of appreciation for being welcomed into a good family home. Lulu loves the slippers, too, since she is caught napping with them when her mom is not using the footwear. It seems that the furry feline feels very comfortable and warm sleeping beside the fluffy slipper.

It is common for cats to bring gifts to their owners, but most of them are quite unusual. Although Lulu has acquired the gesture of bringing slippers to mom every morning, it is safe to say that it is better than receiving a dead mouse she caught that day! 😂

Lulu used to bring a stuffed owl toy she carries everywhere she goes. Though once she began fetching slippers for mom, she rarely plays with her other toys.

“She used to have a stuffed owl that she would carry with her from room to room. But now that she’s more comfortable at home, it’s just the slippers,” said Kayla. “It really seems like she just wants to take care of my mom since my mom takes such good care of her.”

Lulu also has her own Reddit page called r/LuluTheCat, showcasing the slipper-fetching videos she does every day. The fluffy feline has become so famous that her page garnered 1,000 members in just 10 days!

A pair of critically endangered Philippines eagle is getting a new...