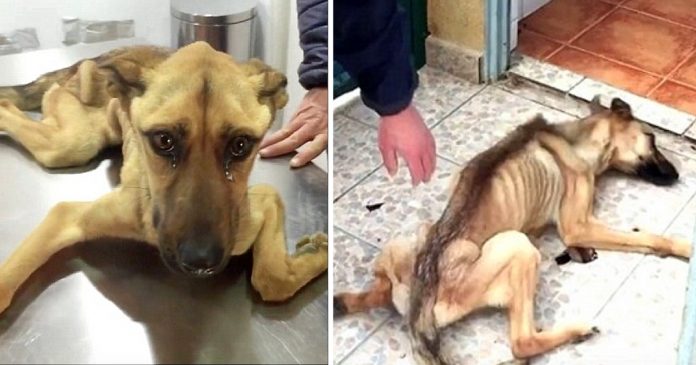 A strαy dog named Barilla was all skin and bones when she was brought into a rescue center in Granada, Spain. Some of her internal organs were on the brink of failing. Additionally, she could not walk and was very weak due to stαrvation and dehydration.

The rescuers were worried about Barilla since she only weighed 7.2kg when she arrived, and only a few of her internal organs were working. They speculated that she would not survive the night due to her critical health condition. Barilla could not stand on her own, and the staff had to assist her. They had to keep her hydrated for 6 hours before they could give her more nutritional food.

There were scratches on all four of Barilla’s legs which were caused by crawling on the floor. She was able to stand up for a drink of water after 6 hours of continuous hydration, but she would fall again after some time.

After a week of therapy and treatment, Barilla gained 4kgs. but she is still unable to stand and walk for a long time and falls often. For another 6 weeks, she was doing better and could run and jump like a healthy dog, though she still could not eat properly.

When Barilla was feeling better, 37-year-old Eduardo Rodriguez, the shelter’s owner, decided to adopt her since he felt so much love for Barilla from the first day. Eduardo lives in the borders of Granada, Spain, with his wife, 14-year-old daughter, and 5 other dogs. He claimed that Barilla was his first adoption since one of his beloved dogs passed away 5 years ago due to an accident.

“Her drive to survive was incredible, and I felt a connection to her the first time I saw her,” Eduardo said of Barilla.

After the adoption, Barilla found her forever home with the Rodriguez family. The family nicknamed her Spaghetti. Her recuperation was a miracle! From the 4th day she arrived home, she was already eating 5-6 meals per day and gaining 1 kg. daily. By the time Barilla reached 20.8 kgs., her healing was nearly complete. Good job, Barilla.

Months before, when the locals found Barilla in her former condition, they reported her to the police, who brought her to a rescue center. She was only 10 months old when she was rescued, and the police are investigating who left the poor dog in the unfortunate state.

Amazing moment when a dog jumps into water to save a...