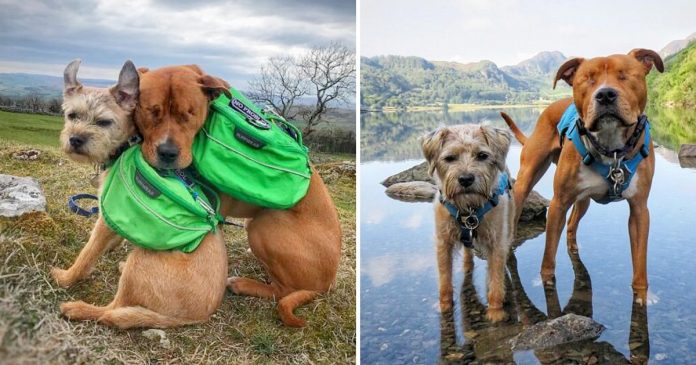 An adorable Staffordshire Terrier was born blind and having difficulty finding a forever home. Fortunately, a kind-hearted shelter volunteer who worked at a nearby animal rescue organization fell in love with the dog named Amos and welcomed him into her home. Jess Martin decided to change the fate of the lovable blind pup.

However, in the Martin household, a 9-year-old terrier named Toby concerned Jess since they have been best friends for years. They have a strong bond and have been on fun adventures together. Adding Amos to the family worried Jess since the blind pup and Toby’s friendship began with unpredictability throughout the days that passed.

Amos spent his entire life in a shelter and has never lived in a forever home… until now. The adjustment period was difficult for him since he would often bump into walls, dislikes the feel of the carpet on his paws, and feel terrified by the sounds on TV. Finding the water bowl was quite difficult for Amos. Initially, Toby was doubtful of Amos. After a few days, a wonderful thing happened between the two canine siblings.

When Amos wanted a drink of water, Toby would gently push him in the right direction, Jess would often see Toby leading Amos in directions where he wanted to go. He found a guide in Toby, who became his forever friend. The family suddenly became aware that the two siblings did not have difficulty getting along after all.

As Amos grew older, he was examined by an eye doctor. He claimed that the dog’s eyes were causing Amos pain and suffering, and removing them would be a merciful decision. After the surgery, Toby became Amos’ “unofficial guide dog.” Initially, Amos was terrified when he and Toby would go on walks with the family. The noises he heard around him made Amos nervous, and he would stop and lie down for a break. When Toby notices this, he lies down beside his beloved friend to calm him down.

Nowadays, hiking through the hills is one of the best friends’ favorite past times. While walking and he strays, Toby guides Amos with gentle bumps and leads him in the right direction. “They have developed good communication between them, and they know each other’s limitations,” says Jess.

Although Amos has learned how to hike with the help of his friend, he still has to learn how to socialize with other dogs. Most dogs are scared of Amos since he could not communicate well like normal dogs. Toby steps in to be his “middleman” when they mingle with other canines. Every day, the two best friends work hard to enhance Amos’ social skills.

So far, Toby has been the best guide dog for Amos. He has become a bodyguard and a lifelong friend to the blind dog, and together, they are unstoppable! These two are friends for life!