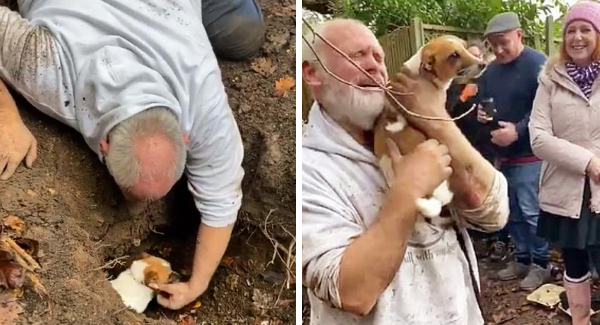 When a pet goes missing, we get frantic and go beyond our limits just to get them back. In the process, a mixture of feelings overwhelms us… fear, guilt, and sadness. But, when they pass away, we are devastated and heartbroken that it takes time for us to move on from the pain, and we get reluctant to adopt another pet. We admit, though, that there are a lot of strays who need a loving family and we cannot resist the chance to love a new furry family member again.

49-year-old Alan Whitton from Essex always had a soft spot for animals. Although he works as a life coach, he admits that he prefers being around animals. In 2018, a moment of devastation hit Alan when his beloved dog, Tinker, had to be put down via euthanasia due to cancer. He felt heartbroken that he turned to his other dog, a Jack Russell named Mitzi, for comfort. One consoled the other in these times of sadness. “I call her my business partner because she is always with me, by my side,” Alan said. Since then, the duo became inseparable.

One November afternoon in 2019, when Alan took Mitzi for a walk around Knighton Wood, she was chased by a Basset Hound. She did not return. Alan spent the whole afternoon desperately seeking Mitzi and left the place at 6:30 PM with no luck. He came back an hour later with his family and searched the area again, with Alan feeling overwhelmed with emotions and thinking the worst.

“It was hellish,” Alan said. “I was thinking she was going to die. I broke down crying to anyone I spoke to about Mitzi. I was missing her so much.”

He admitted that he could not sleep that night thinking of Mitzi, and he was thinking about the worst that could happen to the poor pup. The search continued the next day, and when Friday afternoon came, and Mitzi still has not been found, Alan put up ‘missing dog’ flyers and dropped off leaflets on every house. When he felt all hope was gone, Alan received a call from a woman who was walking her dog in the woods.

“She said her dog had been sniffing around a foxhole, and it never sniffs foxholes, so I dropped everything and went to investigate,” Alan said. While hurrying down to the area, Alan was praying for a miracle and suddenly heard the whimpering of a dog coming from a hole in the woods. It was Mitzi, Alan thought.

Hearing a bark this time, he was trying to determine where it was coming from. Listening closely, he scanned the area for an opening in the ground. Alan got down on his knees and started digging the ground frantically with his hands. Strangers who passed by helped him dig.

“I needed shovels,” Alan said. “The lady who called me kindly gave me one, and I started digging. The people started turning up to help. It was amazing!” The passers-by got shovels and started digging while the trapped Jack Russell kept barking. Finally, after a few minutes, Alan saw Mitzi down a foxhole and pulled her out, but not without difficulty. Once he got her out, he burst into tears and hugged his beloved Mitzi. The strangers who helped witnessed the emotional moment and were happy that the dog was safe.

“I just broke down. I was overwhelmed with joy and disbelief, and I had started to lose hope,” Alan said. “It was like a Christmas miracle. All the time, it felt like a nightmare I couldn’t wake up from. The prospect of not having Mitzi here at Christmas, I couldn’t even contemplate.”

Cheers came from the passers-by who stopped and helped with the rescue mission, and Alan continued to celebrate the return of his beloved Mitzi. “The first thing she did was smash her way through a Greggs vegan sausage roll,” said Alan once he arrived home with the Jack Russell. Mitzi was taken to the vet for a general check-up and was deemed ‘all clear’ by the vet, though they had to remove some ticks sticking at her fur due to the days she was trapped underground.

Alan is now planning to put a GPS collar on Mitzi to prevent the incident from happening again.