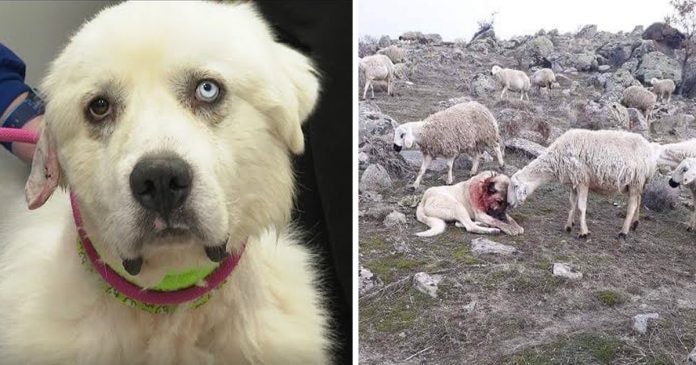 We should not underestimate the loyalty of our pets, and this has been proven over time. In Decatur, Georgia, a 2-year-old Great Pyrenees dog breed who works as a livestock guardian defended his owner’s flock of sheep by fighting off 11 coyotes preying on the herd. He managed to kill 8 of them, then chased the other 3 away.

Early November this year, John Wierville awoke at night hearing the sounds of coyotes outside. Looking out the window, he saw the herd stuck against a fence with another sheep named Daisy watching them. Casper, the herd guardian, was blocking the way of the coyotes and preventing them to approach the flock. Casper did not hesitate to fight back when the pack of coyotes attacked.

“I could see the coyotes running around in this area,” John Wierville said, showing the part of the yard which was often visited by wild coyotes. “When I came over here, Casper took off.”

The local television station, WAGA-TV, reported that a pack of 11 coyotes attacked the flock of sheep owned by John Wierwiller. The heroic dog fought the pack for about half an hour and managed to kill 8 of the predators before he chased the other 3 away from the area. Fortunately, no sheep was harmed, though Casper was not very lucky.

“Casper defended the sheep furiously in a fight that left some of his skin and part of his tail torn off,” Wierwiller said in a post on Facebook.

According to CBS News reports, Casper chased the remaining coyotes away but did not immediately return. Weirville, his family, and neighbors searched the area for Casper and found a bloody trail and pieces of his torn-off tail, but there was no sign of him. Wierwiller expected the worst. 2 days later, Casper returned home on his own, and Wierwiller found him resting in the chicken hutch.

“He was kinda looking at me like, ‘Boss, stop looking at how bad I look, just take care of me,’” Wierwiller said. “It looked like a coyote grabbed his skin and peeled it right off.”

Resorting to Facebook, Wierwiller said that Casper was brought to the vet in critical condition. They managed to close an open neck wound and hoped that the treatment given would minimize infection. He was then transferred to Lifeline Animal Project, where he stayed for a month. The veterinarians were not sure if he would survive since he was brought to them in bad shape. Fortunately, he made it through multiple operations, and his wounds healed fast. He is now recuperating.

The GoFundMe campaign for Casper has raised more than $15,000 for his hospital bills. Citizens are touched by his bravery and have volunteered to donate. Fortunately, the vet facility volunteered its services for Casper, and it may take him months to fully recover. When Weirville paid a visit to Casper, he was thrilled with his improvement.

“I can’t express how happy I am to see him,” Wierwiller said, while hugging his beloved dog. “Casper has been ‘a little tentative about everything’ since his brush with death. But the vets have said that with a little bit of luck, Casper may not even require any skin grafts. It really is a remarkable bit of news, and we are celebrating!” What seems to be a doubt that Casper will live through his injuries turned into a strong belief that he will completely heal and will be back home soon.

LifeLine Animal Project is a non-profit organization. You may donate to them so they may provide help to other heroes like Casper. You may visit their website by clicking HERE.

▼ The video below shows how the vets of the organization bravely saved Casper’s life.