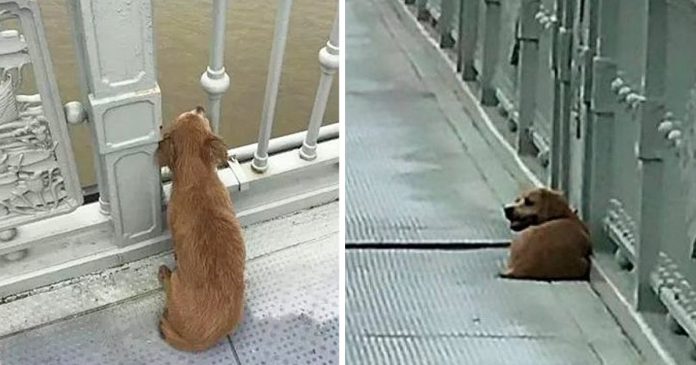 For 4 days, a loyal dog waited on the Yangtze River Bridge in Wuhan, China, after witnessing his owner jump onto the river below and never returned. Netizens who saw the photos of the faithful dog patiently waiting on the spot where he saw his owner jump were moved and felt sorrow for the poor pup.

According to the Chutian Metropolis News, a man named Mr. Xu took photographs of the dog sitting on the bridge’s pavement and posted them online. He intended to take the dog home, but when the loyal pup saw him approach, he felt terrified of the stranger and ran away. Mr. Xu assumed that the dog just wanted to stay on the same spot on the bridge and refused to be helped. The director of the Wuhan Small Animal Protection Association, Mr. Du Fan, saw Mr. Xu’s post online, and he gathered volunteers to search for the waiting dog.

“On the evening of May 30, the dog accompanied its owner to the Yangtze Bridge,” Mr. Du Fan said. “We requested that the bridge officers investigate what had occurred. It was quite dark… The surveillance film didn’t reveal anything… We noticed the individual immediately leap over the bridge into the water.”

Dogs are known to be very faithful to their owners and are willing to wait for their return once they leave. Mr. Du Fan and the volunteers hoped that they can locate the poor pup and find him a loving forever home.

Another incident occurred in Wuhan Taikang Hospital when a dog waited over 3 months for his owner to reunite with him after he was rushed to the hospital. Unfortunately, the dog was unaware that his elderly master passed away from COVID-19 only 5 days after being brought to the hospital. The 7-year-old dog would appear in the lobby of the hospital waiting for his master unknowing that his master will never return. Kind-hearted individuals felt for the poor pup and gave him food and drink. After a few days, the local shelter claimed him and found a loving family who took him in.

Dog owner turns on radio and it is playing ‘We Are...