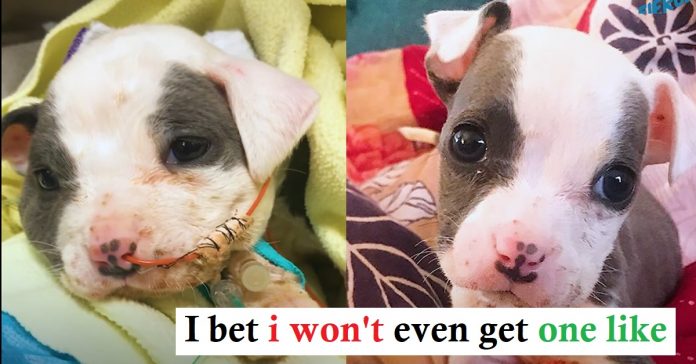 A baby Pitbull was found abandoned and wandering around a construction site. He was not doing well and was in bad condition. When Love Leo Rescue, a shelter in Santa Monica, California, stepped in to help, the 2-pound puppy was gradually nursed back to health. They named him Carl, and he loves the attention he receives from humans.

During his first day at the shelter, Carl could not eat or drink on his own. A medical tube had to be inserted into his nose to feed him. He received so much love and affection from the staff that a miracle happened. After merely 2 days, he has progressed and could eat a little on his own. The staff is hoping for him to make a full recovery in hopes to find him a good foster home.

Surprisingly, celebrities in the area, such as Ellen Pompeo and Olivia Munn, came to visit the cute little pittie. Soon, Carl was ready to go to his foster home. His foster mom loves to bring him everywhere she goes, and Carl cries very loudly when he is in his cage. In his new foster home, he has many siblings and loves to show them who’s boss!

During walks with his foster mom, Carl enjoys tugging on the leash. A few weeks passed, and Carl recovered. He grew up to be a handsome Pitbull, and many animal lovers wanted to adopt him. Finally, Carl found a forever home in the arms of a lovely woman. His human mom takes Carl to work with her, go to meetings, and ride around in her sprinter. Carl’s life turned out for the better, and he has made new friends through his mom. Additionally, Carl has become an ambassador for rescue Pitties like him.

It touches our hearts to learn that Carl has found his forever home and is doing very well with his mom. A feeling of satisfaction filled the hearts of the people who provided support and help to make Carl get better. A puppy who was once in poor shape and wandering a construction site is now a healthy and handsome Pitbull. Thanks to his rescuers, foster mom, and the forever home who took him in. A wonderful ending!

Heartwarming reunion when dog finally gets to greet favorite postman who...